Where in health am I? : Home / Health Cloud / Challenges / Cancer / Cancers / Bladder Cancer

Cancer is such a friggin' monster. It's radical. You go through the process of ‘what are you going to do...Patti Hansen 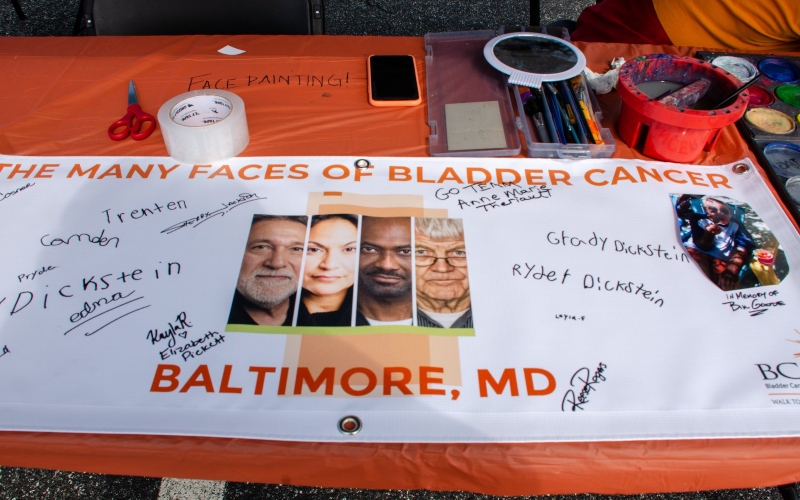 Bladder cancer gets one of the most exciting awareness ribbons; it’s marigold, blue and purple.

But the disease itself doesn’t get a lot of attention.

“It’s probably more common than you realize,” said Dr. Brent Carlyle, a urologist at Rome Medical Practice and AMP Urology in Rome. “Generally smokers are the ones who get it. About 75 percent of the time, people who get bladder cancer have a smoking history.”

People exposed to chemicals, such as hairdressers or factory workers; people with frequent bladder infections; people who have been treated with radiation for prostate cancer; and people with a Middle Eastern parasitic infection are also at higher risk,…

Environmental risk factors are thought to be more important than genetic or inherited susceptibility when it comes to bladder cancer. The most significant known risk factor is cigarette smoking.

After 30 years of no new treatment advances, people with bladder cancer are starting to have new options. Most recently, the cancer immunotherapy TECENTRIQ (atezolizumab) was approved as a first-line treatment for people with locally advanced or metastatic urothelial carcinoma (mUC) who are not eligible for cisplatin chemotherapy, which is a standard treatment

After 2nd Bout With Cancer, Seeking to Heal His Body and Mind

Things may not get better, he said, but accepting reality has been the surest way to keep his vibrancy from eroding. “There is no reversal,” Mr. Riddick said. “So you’ve got to deal with it.”

Patti Hansen has now partnered with Sloan-Kettering to spread the word that bladder cancer isn’t just a man’s disease and it doesn’t have to be a death sentence.

How much of an impact immunotherapy will have on bladder cancer is a bit unclear since patients have not been followed for a long time. But the F.D.A. found Roche’s data compelling enough, and the need urgent enough, to approve Tecentriq about four months ahead of the agency’s Sept. 12 deadline.

How Many People Were Killed by Love Canal?

Over the decades, unusual occurrences of cancer among workers have led to the identification of some carcinogens—the link between mesothelioma and asbestos, for example, and between bladder cancer and aromatic amines (substances also found in cigarette smoke). But even occupational clusters are uncommon.

In the US, most people are drinking water that is legally “safe” but isn’t actually risk-free

For hundreds of other contaminants, the government doesn’t impose requirements at all. Rather, states and the federal government issue health guidelines, which function as unenforceable suggestions or goals. These are recommended levels, at which the risk is deemed acceptable, not necessarily absent. (For any cancer-causing contaminant, however, the federal guideline is “zero.”) Tens of thousands of water utilities are contaminated at levels that exceed these too, according to the database. The utilities it includes cover the water supply of roughly 280 million people in the US.

“Believe it or not, bladder cancer is actually the fourth leading cause of cancer death in men,” said Dr. Ruben Pinkhasov, director of Upstate Urology at the Mohawk Valley Health System. And it is a uniquely tough disease.

The first national advocacy organization dedicated to improving public awareness of bladder cancer and increasing research directed towards the diagnosis, treatment and cure of the disease.

The goal of this bladder cancer specific website is to help you find answers, relieve some of the fear, reinforce hope and to help you or your loved one find the best path on a difficult journey.

Our purpose is to offer support and information and to advocate for the bladder cancer community. We firmly believe that lives can be saved through awareness of bladder cancer’s symptoms.

The treatment for both non-muscle invasive and invasive bladder cancer is becoming more sophisticated daily as we gain knowledge of the behavior of these cancers, identifying new targets for therapy and improving surgical techniques and both chemotherapy and immunotherapy.

A new or recurrent diagnosis of bladder cancer often results in fear and confusion for patients and their family members. Understanding treatment options, accessing new and innovative therapies through clinical trials, as well as understanding the role of supportive care and complementary and alternative medicine are essential.

The best way to prevent bladder cancer is to avoid exposure to agents that cause the disease. People who don't smoke are three to four times less likely to get bladder cancer as compared to smokers. Continuing to smoke after the diagnosis of bladder cancer portends a poorer outcome and increases the chance of the disease coming back after treatment. Avoidance of occupational exposure to cancer-causing chemicals such as aniline dyes may also be important.