Where in health am I? : Home / Health Cloud / Challenges / Diabetes / Tests for Diabetes

Checking your fasting blood glucose (sugar) levels makes a difference when it comes to successfully managing your diabetes. But are you also making sure to test your blood glucose levels after you eat - Madeline R. Vann, MPH 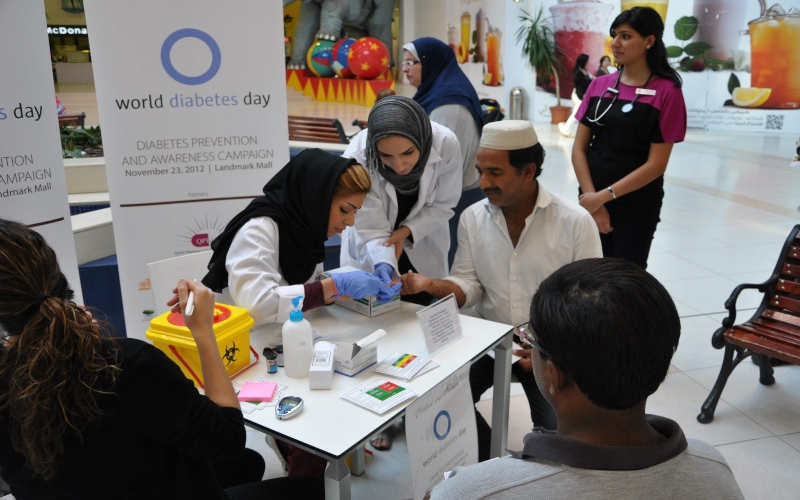 Here’s the thing. We’ve confused normal with common. Just because something is common, doesn’t mean it’s normal. It’s now becoming common for kids to be overweight and diabetic because they eat nothing but refined flour, high-fructose corn syrup and industrial seed oils. Yet I don’t think anyone (even the ADA) would argue that being fat and metabolically deranged is even remotely close to normal for kids. Or adults, for that matter.

In the same way, the guidelines the so-called authorities like the ADA have set for normal blood  sugar may be common, but they’re certainly not normal. Unless you think it’s normal for people to develop diabetic complications like neuropathy, retinopathy and cardiovascular disease as they age, and spend the last several years of their lives in hospitals or assisted living facilities. Common, but not normal.

In this article I’m going to introduce the three markers we use to measure blood sugar, and tell you what the conventional model thinks is normal for those markers. In the next article, I’m going to show you what the research says is normal for healthy people. And I’m also going to show you that so-called normal blood sugar, as dictated by the ADA, can double your risk of heart disease and lead to all kinds of complications down the road.

The 3 Ways Blood Sugar Is Measured

This is still the most common marker used in clinical settings, and is often the only one that gets tested. The fasting blood glucose (FBG) test measures the concentration of glucose in the blood after an 8-12 hour fast.

It only tells us how blood sugar behaves in a fasting state. It tells us very little about how your blood sugar responds to the food you eat.

Up until 1998, the ADA defined FBG levels above 140 mg/dL as diabetic. In 1998, in a temporary moment of near-sanity, they lowered it to 126 mg/dL. (Forgive me for being skeptical about their motivations; normally when these targets are lowered, it’s to sell more drugs – not make people healthier.) They also set the upward limit of normal blood sugar at 99 mg/dL. Anything above that – but below 126 mg/dL – is considered “pre-diabetic”, or “impaired glucose tolerance” (IGT).

Keep in mind these are completely arbitrary numbers. If your result is 139 mg/dL – just one point below the pre-diabetic cut-off – you’ll be considered “normal”. Of course this is perfectly absurd. Diabetes isn’t like catching a cold. You don’t just wake up one day and say, “I’m not feeling so well. I think I got a bad case of diabetes yesterday.” Like all disease, diabetes—and diabesity—is a process. It goes something like this:

Before your blood sugar was 139, it was 135. Before it was 135, it was 130. Etcetera. Would you agree that it’s wise to intervene as early as possible in that progression toward diabetic blood sugar levels, in order to prevent it from happening in the first place? Well, the ADA does not agree. They prefer to wait until you’re almost beyond the point of no return to suggest there’s any problem whatsoever.

The other problem with the OGTT is that it’s completely artificial. I don’t know anyone who drinks a pure solution of 75 grams of glucose. A 32-oz Big Gulp from 7-11 has 96 grams of sugar, but 55% of that is fructose, which produces a different effect on blood sugar. The OGTT can be a brutal test for someone with impaired glucose tolerance, producing intense blood sugar swings far greater than what one would experience from eating carbohydrates.

Hemoglobin A1c, or A1c for short, has become more popular amongst practitioners in the past decade. It’s used to measure blood glucose in large population-based studies because it’s significantly cheaper than the OGTT test.

A1c measures how much glucose becomes permanently bonded (glycated) to hemoglobin in red blood cells. In layperson’s terms, this test is a rough measure of average blood sugar over the previous three months.

The higher your blood sugar has been over the past three months, the more likely it is that glucose (sugar) is permanently bonded to hemoglobin.

The problem with the A1c test is that any condition that changes hemoglobin levels will skew the results. Anemia is one such condition, and sub-clinical anemia is incredibly common. I’d say 30-40% of my patients have borderline low hemoglobin levels. If hemoglobin is low, then there’s less of it around to become bonded to glucose. This will cause an artificially low A1c level and won’t be an accurate representation of your average blood sugar over the past three months.

The “normal” range for A1c for most labs is between 4% and 6%. (A1c is expressed in percentage terms because it’s measuring the percentage of hemoglobin that is bonded to sugar.) Most often I see 5.7% as the cutoff used.

*If this got your attention check out Why Your “Normal” Blood Sugar Isn’t Normal (Part 2).

How to Prevent Diabetes and Heart Disease for $16

The strategy I’m referring to is using a glucometer to test your post-meal blood sugars. It’s simple, accessible and completely bypasses the medical establishment and pharmaceutical companies by putting the power of knowledge in your hands.

For Many Diabetes Patients, Skin Patches and Phones Are Replacing Finger Pricks

Another key takeaway from this article is that fasting blood glucose and A1 are not often reliable for predicting diabetes or CVD risk. Post-meal blood sugars are a more accurate marker for this purpose. And the good news is that this can be done cheaply, safely and conveniently at home, without a doctor’s order and without subjecting yourself to the brutality of an OGTT.

Why Checking Postprandial Glucose Is Important

Checking your fasting blood sugar levels is a key component of successful diabetes management — but are you also making sure to test after meals?

So the health care system should figure out how to teach patients how to test productively rather than just testing. Productive testing is a lot cheaper than treating complications.

Choosing Wisely, an educational campaign aiming to reduce unnecessary medical tests and procedures, advises against routine home glucose monitoring for patients with Type 2 diabetes who are not on insulin. It says there is no benefit, and that there are potential harms (a study has shown an association with increased anxiety and depression). This argument is supported by the American Academy of Family Physicians, the Society of General Internal Medicine and the Endocrine Society. Of course, there are exceptions.

Diabetes: new test could detect the disease much earlier

The Complexity of Diagnosing Type 1 Diabetes

Because each case can be as unique as the individual, some doctors may employ the following tests to find markers of T1D to ensure the optimal treatment plan: C-Peptide While most tests check for antibodies, this test measures how much C-peptide is in a person’s blood. Peptide levels typically mirror insulin levels in the body. Low levels of C-peptide and insulin can point to T1D. Insulin Autoantibodies (IAA) This tests looks for the antibodies targeting insulin. Insulinoma-Associated-2 Autoantibodies (IA-2A) This test looks for antibodies mounted against a specific enzyme in beta cells. Both the IA-2A and GADA tests are common T1D antibody tests...

Helen Murray Free teamed up with her husband to invent color-coded strips of paper that could be dipped in urine to detect glucose levels. These Clinistix tests, introduced in 1956, allowed people with diabetes to test themselves regularly at home rather than relying on expensive laboratory tests. The strip technology also was applied to tests for proteins and many other substances.

Once people have applied the sensor on their arms, they can wave a mobile device a little smaller than a smartphone in front of it to read glucose levels. It takes about 12 hours for the wire to become adjusted to the person’s body, but afterward the device takes continuous data that tracks blood sugar over time for over a week. Afterward, you peel the sensor off slowly, and apply a new one.

In this article I’m going to introduce the three markers we use to measure blood sugar, and tell you what the conventional model thinks is normal for those markers. And I’m also going to show you that so-called normal blood sugar, as dictated by the ADA, can double your risk of heart disease and lead to all kinds of complications down the road.

Do you think you may already have diabetes? This simple online diabetes screening test helps assess your risk for having or developing diabetes but is not intended to replace an examination by your physician!

There are several ways to diagnose diabetes, and each way usually needs to be repeated on a second day to be sure you have it.

Do I Have Prediabetes?

Glucose tolerance tests: What exactly do they involve?

The oral glucose tolerance test (OGTT) is currently the gold standard for the diagnosis of diabetes. The recommended preparation for and administration of the OGTT are important to ensure that test results are not affected. Interpretation is based on venous plasma glucose results before and 2 hours after a 75 g oral glucose load.

The 2 main tests used to measure the presence of blood sugar problems are the direct measurement of glucose levels in the blood during an overnight fast and measurement of the body's ability to appropriately handle the excess sugar presented after drinking a high glucose drink.

The glucose tolerance test (GTT) consists of drinking 100 grams of glucose solution and measuring the blood glucose values every hour to get a curve. The values obtained tell a lot about the body's sugar metabolism. The following 10 tables of results are typical and are interpreted briefly.

You’ll need to get your blood sugar tested to find out for sure if you have prediabetes or type 1, type 2, or gestational diabetes. Testing is simple, and results are usually available quickly.

Do not try to diagnose yourself if you think you might have diabetes. Testing equipment that you can buy over the counter, such as a blood glucose meter, cannot diagnose diabetes.