Where in health am I? : Home / Health Cloud / Challenges / Drugs & Medications / Prescriptions / Save on Prescriptions

Our mission is to make medication inexpensive, clearly priced and easy to purchase - Geoffrey Chaiken 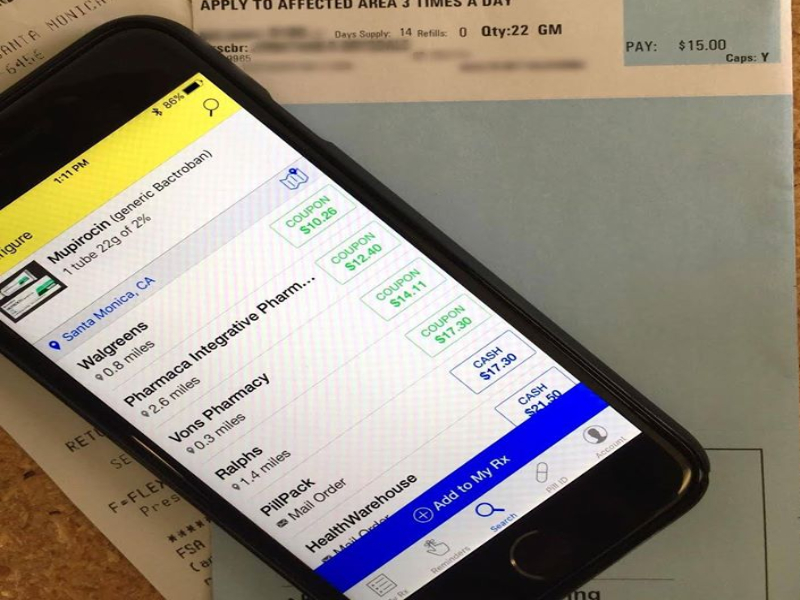 There's an app for just about everything...

But when it comes to buying prescription drugs, consumers still find the process maddeningly antiquated. Now, a few entrepreneurs say they are aiming to fundamentally change the way people buy drugs, bringing the industry into the digital age by disclosing the lowest prices for generic prescriptions to allow comparison-shopping.

Most major pharmacies do not list the price of the drugs they sell. And even if they do, prices for the same drug can vary strikingly and cost far more than the rate that most insurers pay. Consumers often don’t know how much they will owe until the pharmacist tallies the purchase at the cash register.

“The prices are all over the map, even within the same ZIP code,” said Lisa Gill, deputy editor of Consumer Reports Best Buy Drugs, which tracks variation in prices. “It’s a retail transaction that doesn’t actually act like any retail transaction"...

The spotlight on drug prices could not come at a better time for at least two online ventures. One company, GoodRx, collects drug prices at pharmacies around the country and connects consumers to coupons to help them pay. Another, Blink Health, takes the process a step further by allowing customers to pay for their drugs online, then pick up the prescription at nearly any pharmacy.

“This is the first time the consumer knows what the price of the item is before they get to the register,” said Geoffrey Chaiken, one of Blink Health’s founders. “We cracked the code.”

GoodRx and Blink Health often quote prices for generic drugs that are far lower than the prices that pharmacies typically charge customers paying out of pocket instead of through insurance. Instead, the sites and their apps are offering customers prices that are closer to the rate that is typically available — or even visible — only to insurers.

Ten of the country’s 15 most commonly prescribed drugs, for example, cost less than $10 on Blink Health, including generic versions of drugs like Lipitor, which manages cholesterol, and the diabetes drug metformin.

The sites cannot help much with brand-name drugs, which are made by a single manufacturer and carry prices that can be as high as hundreds of thousands of dollars. The purchases also often do not count toward a consumer’s insurance deductible, which could be a problem for seriously ill patients with high medical costs.

However, nearly 90 percent of the prescriptions dispensed in the United States are for generic drugs, according to IMS Health, a consulting firm. Edward A. Kaplan, the national health practice leader at Segal Consulting, a benefits consulting firm, said the prices he surveyed on Blink Health were comparable to prices he negotiated on behalf of large employers. “It’s about as good as you’d see it,” he said.

In addition, many uninsured consumers do not know that the price pharmacies charge them is far higher than the rate that insurers pay the pharmacies for the same drug, health care experts said. And even insured customers are not always getting the best deal. Many people have insurance plans that require them to pay a flat rate of $10 or higher for generic drugs, even though the rate the insurers pay the pharmacy is often less.

The listed price for a 30-day supply of the generic version of Lipitor, for example, is $196 at Kmart, according to GoodRx, and $61 at Kroger. With a coupon obtained through GoodRx, the drug is about $12. Blink Health is offering Lipitor for $9.94. “People should be rioting,” Mr. Chaiken said, “but it’s just that health care is too complicated”...

Express Scripts, the nation’s largest drug-benefits manager that also owns one of the biggest pharmacies, acknowledged that some consumers could save money by buying low-cost generics through sites like GoodRx or Blink Health. But Express Scripts said a typical member would save more money by going through insurance. Express Scripts also said that it monitored patients’ prescriptions to ensure that they were not taking drugs that could lead to dangerous interactions.

“No single retail pharmacy or doctor has the same line of sight to the patient’s entire medication history,” Express Scripts said in a statement.

Still, Blink Health said many of its customers saved hundreds of dollars a year, pointing to Wendy Comerford, a business owner in Florida, and others. Ms. Comerford, who has lupus, said she was saving about $500 off her $1,000 monthly drug bill for 11 prescriptions.

“If it weren’t for the drugs that I’m on, I would be sitting in a Barcalounger on disability,” said Ms. Comerford, 63, who lives in Sanford, Fla. She said she did not renew her insurance policy last year because the premiums were too high. “I’m getting the exact same drugs that I was last year.”

But Louise Norris, a Colorado insurance broker who also writes for the website Healthinsurance.org, said that patients who suffered the most from high drug prices are those who need expensive brand-name drugs, which can cost hundreds of thousands of dollars a year.

“When our clients are looking for medications, to be honest, the difference between $5 and $10 — those aren’t the ones that people are having questions about,” she said. “So far, at least, we haven’t seen anything that seems like a magic solution.

Find the lowest price on prescriptions right from your phone or iPad.

With discounts on pets’ and people’s medications, see if you could save, for peace of mind and a bigger piece of your budget!

Make key decisions at the point-of-care. Not all drugs are covered by your insurance. Identify restrictions & check out of pocket costs during your appointment

Patient assistance programs are run by pharmaceutical companies to provide free medications to people who cannot afford to buy their medicine. RxAssist offers a comprehensive database of these patient assistance programs, as well as practical tools, news, and articles so that health care professionals and patients can find the information they need. All in one place.

RxHope is exactly what its name implies...a helping hand to people in need in obtaining critical medications that they would normally have trouble affording. We act as your advocate in making the patient assistance program journey easier and faster by supplying vital information and help.

Pay $10 or less on thousands of medications! Use Blink Health to save up to 85% on your prescriptions at virtually every U.S. pharmacy.

NeedyMeds is a resource for advocates as well as people who need assistance.

SelectCare Benefits Network (SCBN) is one of America's leading Patient Advocacy Organizations that specializes in free medicine and prescription assistance programs (pap.) SCBN gives prescription drug assistance by helping it's member patients locate, qualify for and successfully access hundreds of free prescription programs on an ongoing basis for only a fraction of the would be retail costs for those prescription medicines.

SingleCare is a free prescription discount card. Think of us as your ticket to better savings. SingleCare is free to use, and there are no hidden fees or obligations.

“Our mission is to make medication inexpensive, clearly priced and easy to purchase.”

While there's pricing transparency for most products, costs vary widely for the same medication at different drug stores. The terrain has created an opening for one enterprising start-up looking to shake up the market.

How Can You Afford Your Medications?

Options are available to limit your out of pocket drug costs. You just have to know what questions to ask your partner...your doctor.

If you're looking to save a few dollars — who isn't, really? — here is some fail-safe advice: stop buying Advil. Stop buying Tylenol, Aleve, Motrin or any other brand-name painkiller while you're at it. This isn't to say you shouldn't buy any painkillers at all — just that you should pick up the generic version — the acetaminophen and ibuprofen and naproxen that your local drugstore chain markets for about one third of the price.

The way to fix outrageous drug pricing in the US

As consumers face rapidly rising drug costs, states across the country are moving to block “gag clauses” that prohibit pharmacists from telling customers that they could save money by paying cash for prescription drugs rather than using their health insurance.

The spotlight on drug prices could not come at a better time for at least two online ventures. One company, GoodRx, collects drug prices at pharmacies around the country and connects consumers to coupons to help them pay. Another, Blink Health, takes the process a step further by allowing customers to pay for their drugs online, then pick up the prescription at nearly any pharmacy.