Where in health am I? : Home / Health Cloud / Challenges / Endocrine / Hormones / ACTH 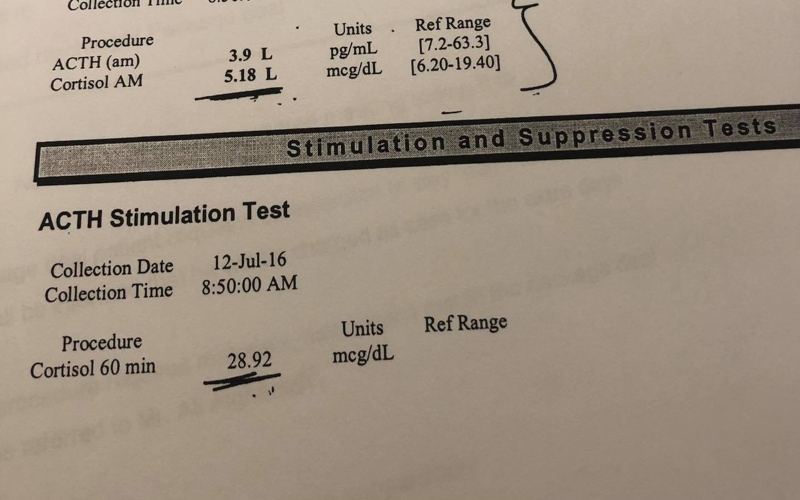 image by: The Endocrine Club

Chris’ explanation of the ACTH STIMULATION TEST (aka STIM)

The ACTH stimulation test, also called a Synacthen test, measures how well your adrenals can respond to stress by testing the amount of cortisol the adrenals produce after being stimulated by a synthetic form of ACTH. The real ACTH is a messenger hormone released by your pituitary to stimulate the adrenals to release cortisol.

This is a simple test helps differentiate between having a problem right in the adrenals themselves like Addison’s, versus having hypopituitary and failure to release the ACTH.

Your blood is taken to get a starting or base cortisol level (serum acth should also be tested), then you are injected with the synthetic acth (synacthen or cortrosyn). Usually,…

She Craved Salt and Felt Nauseated for Months. What Was Wrong?

A few days later, the first batch of labs were back. These measured ACTH, the hormone that controls the adrenal glands. Normally just a whisper of ACTH is enough to get the adrenal glands working. But the woman’s test showed that the hormone was practically shouting — and was still not being heard. Her ACTH level — which is typically lower than 50 — was nearly 2,000. And even at that level, the expected adrenal-response hormone, cortisol, was barely detectable. She had primary adrenal insufficiency.

ACTH deficiency can either be congenital or acquired, and its manifestations are clinically indistinguishable from those of glucocorticoid deficiency.

Children with various types of childhood epilepsy that do not respond to the usual seizure medicines may be candidates for treatment with adrenocorticotropic hormone or ACTH. ACTH is a first-line treatment for infantile spasms, but it is also used in Lennox-Gastaut syndrome, Landau-Kleffner syndrome, and electrical status epilepticus in sleep.

Cosyntropin is a synthetic derivative of adrenocorticotropic hormone (ACTH) that is used in the evaluation and diagnosis of patients with adrenocortical insufficiency. ACTH is a naturally occurring peptide hormone that is secreted by the anterior pituitary to act on the cells of the adrenal cortex to increase secretion of glucocorticoids, mineralocorticoids, and sex steroids. Cosyntropin is an open chain polypeptide containing the first 24 of the 39 amino acids of natural ACTH.

Het regular doctor assumed jet lag was to blame, and recommended she take over-the-counter analgesics for the pain, and prescribed sleep aids for the fatigue. The medications did not help.

Chris’ explanation of the ACTH STIMULATION TEST (aka STIM)

Adrenocorticotropic hormone (ACTH) plays a large role in how your body responds to stress. ACTH is produced in the pituitary gland, its production stimulates the production and release of cortisol from the adrenal gland.