Where in health am I? : Home / Health Cloud / Challenges / Endocrine / Hormones / Prostaglandins

Unlike typical hormones, prostaglandins are not made by glands and then released into the bloodstream. They are made in multiple different tissues and exert their effects locally. They have potent effects, but are short-lived and quickly cleared from the body - Aleksa Ristic 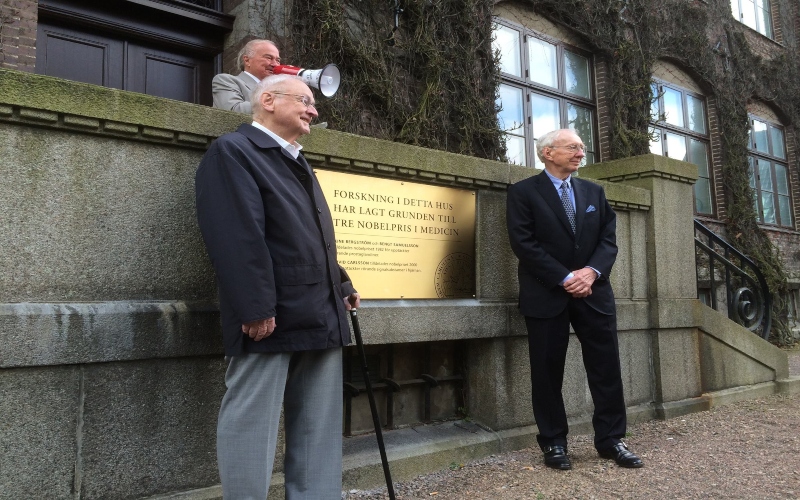 When I hear the term “arachidonic acid” I must admit that I have always thought of spiders. My mind quickly corrects itself, and I remember that arachidonic acid is a polyunsaturated fatty acid, an omega-6 fatty acid, one that we require for its various functions in the brain, muscles, and liver, primarily for the pliable nature of our cell walls and for important signaling to modulate inflammation. But I also know it’s maligned in many viewpoints, so I was eager to hear it all laid out and clarified by Chris Masterjohn.

At the Weston A. Price Foundation(link is external) annual conference in Anaheim last weekend (November 13, 2015), Masterjohn discussed the role of arachidonic acid…

The Prostaglandins: From the Laboratory to the Clinic

The chemistry and biochemistry of the prostaglandins are now described in textbooks, and I have reviewed the early work several times (l-4). I will instead discuss the background of the early prostaglandin work here in Sweden and also some recent developments in the clinical fields that I have been associated with.

Prostaglandins are hormone-like substances, which have wide and significant effects in regulating many vital life processes. The importance of the role of these compounds has been appreciated only in the last decade.

Prostaglandins were first isolated from semen by Swedish pharmacologist Ulf Svante von Euler in 1935. The name prostaglandins is derived from the fact that they were originally thought to be produced by the prostate gland (they are actually produced in the seminal vesicles, among many other types of tissues).

Sune Bergstrom... won the Nobel prize for medicine in 1982, sharing the award with the famous British pharmacologist Sir John Vane and Bengt Samuelsson, his fellow Swedish biochemist. They discovered the vital role played in the body by a family of substances called prostaglandins and related compounds.

Bring On the Exercise, Hold the Painkillers

NSAIDs work, in part, by blunting the body’s production of a particular group of biochemicals, called prostaglandins, that otherwise flood the site of injuries in the body. There, they jump-start processes contributing to pain and inflammation. Prostaglandins also prompt blood vessels to dilate, or widen, increasing blood flow to the affected area. Taking NSAIDs results in fewer prostaglandins and consequently less inflammation and less dilation of blood vessels.

I’m Being Induced! What Should I Expect?

The first thing your doctor will try is ripening your cervix. Typically in natural labor, your cervix will open up, soften, and thin out in preparation for your baby. Your doctor might have to move things alone themselves, and they’ll do this by applying a topical form of the hormone prostaglandin to your cervix. After a few hours, labor could be well on its way—if it isn’t, your doctor will continue down the chain of steps toward successfully inducing your labor.

Prostaglandins are lipid autacoids derived from arachidonic acid. They both sustain homeostatic functions and mediate pathogenic mechanisms, including the inflammatory response. They are generated from arachidonate by the action of cyclooxygenase (COX) isoenzymes and their biosynthesis is blocked by nonsteroidal anti-inflammatory drugs (NSAIDs), including those selective for inhibition of COX-2. Despite the clinical efficacy of NSAIDs, prostaglandins may function in both the promotion and resolution of inflammation.

Prostaglandins and the Reproductive Cycle

Like steroids, prostaglandins are a group of compounds that have somewhat similar structures but may have totally different effects. Prostaglandins appear to be autocrine or paracrine regulators rather than true hormones because they are both produced and act locally

The hormone (prostaglandin) based serums are effective but come with multiple side effects that can damage your beauty permanently.

Why You Have So Much Diarrhea When You're on Your Period

The chemical culprit is prostaglandin. Prostaglandin is a lipid that your body uses to prevent blood loss and promote clotting; it works by narrowing the blood vessels in your muscles, which can cause them to contract. (A synthetic type of prostaglandin is given to women to induce labor.)

The cox-2 enzymes produce prostaglandins that not only initiate inflammation but that also resolve inflammation in a timely fashion. Here’s the rub with interfering with their work: when you take an anti-inflammatory such as ibuprofen or naproxen or even acetaminophen, the drug blocks inflammation with moderate effectiveness. However, the drugs happen to be champs at blocking the prostaglandin’s second job of inflammation resolution. So if you strain your back and take an ibuprofen, it won’t hurt quite as bad, but it may hurt for a lot longer than if you let nature take its course. Natural inflammation is self-limiting.

When you are injured, a complicated process of inflammation and blood clotting is triggered. Prostaglandins are a group of lipids that are part of this process. Problems with prostaglandins can limit the healing process, cause increased inflammation and pain, and impact your overall health.

The prostaglandins are a group of lipids made at sites of tissue damage or infection that are involved in dealing with injury and illness. They control processes such as inflammation, blood flow, the formation of blood clots and the induction of labour.

Prostaglandins were first discovered and isolated from human semen in the 1930s by Ulf von Euler of Sweden. Thinking they had come from the prostate gland, he named them prostaglandins. It has since been determined that they exist and are synthesized in virtually every cell of the body. Prostaglandins, are like hormones in that they act as chemical messengers, but do not move to other sites, but work right within the cells where they are synthesized.

Prostaglandins are a group of endogenously produced compounds that play essential roles in regulating human physiology. Synthetically derived prostaglandins can be used to modulate numerous processes in the body.