Where in health am I? : Home / Health Cloud / Challenges / Gastrointestinal / Bowel Obstruction 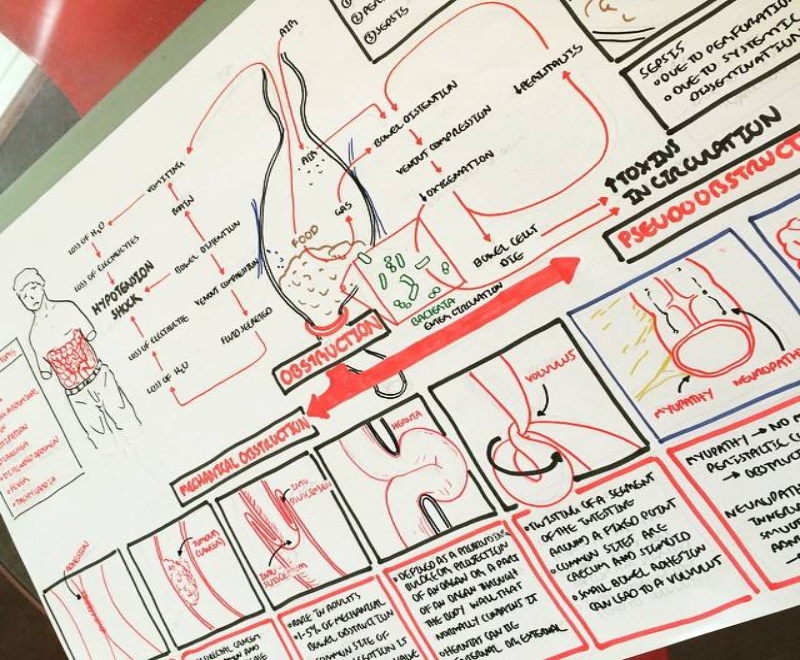 The truth about Small Bowel Obstruction

Small bowel obstruction (SBO) is a very common problem for patients; treated by many different types of medical providers, including primary care, emergency medicine, internal medicine, and surgery. In the United States alone, there are an estimated 300,000 laparotomies performed annually for SBO, and about one third of these obstructions are complicated by intestinal ischemia, with significantly higher morbidity and mortality resulting.

So every patient who shows up with a bowel obstruction should have surgery, to prevent ischemic complications, right? Actually, more than half of patients who present with SBO resolve with nonoperative therapy. Because the most common…

Most people think of diverticulitis or cancerous polyps growing inside the intestinal walls, as causing the bowel obstruction. However, Dr. Richard A. Desi, MD, a gastroenterologist at Mercy Medical Center in Baltimore says, “A bowel obstruction is not really anything on the inside of the bowel.” He explains that most commonly, bowel obstruction can twist “the bowel into a funny position, thus closing it or clamping it off.”

Twisted Bowels- All about Bowel obstructions, both large and small

They make up 2-4% of emergency department visits annually in the US, and 15% of hospital admissions.

Bowel obstruction is a common surgical presentation. It can be categorised into small and large bowel obstruction, with key implications for management.

Within ten minutes of being jolted awake by severe abdominal cramping, my gastrointestinal system began running itself in reverse in an attempt to alleviate the pressure building up. I lost the last meal I would eat for the next 5 days.

Bowel obstruction: a narrative review for all physicians

Diagnosing Small Bowel Obstruction in the ED: A Role for Ultrasound?

Of course there are limitations with this small study. There was a disproportionately high prevalence of SBO in the study population (33 out of 76 patients – 43%), bringing into question its external validity. The doctors performing the US exams volunteered themselves, indicating they were enthusiasts – potentially introducing what the authors describe as ‘ultrasound-interest’ bias.

More than one in 10 (11%) of those having emergency bowel surgery die within 30 days, according to an audit of the treatment received by 21,000 patients at 192 hospitals in England and Wales. But the death rate is higher than it should be because of the widespread failure of hospitals to ensure that patients whose lives are under threat – from vital organ failure and an obstructed bowel caused by cancer – get the right care before, during and after their operation.

A history of surgeries, hernia, or cancer is important to know about. A doctor’s examination accompanied by blood tests and an x-ray or computed tomography (CT) scan can confirm the diagnosis. Most obstructions resolve by allowing the small bowel to rest and shrink back to its normal size, thus making the adhesions less problematic. This is accomplished by inserting a nasogastric (NG) tube (a thin plastic tube that goes through a nostril and into the stomach) that suctions fluid from the stomach.

Swallowing Tiny Magnets Can Lead To Big Trouble For Kids

Most of the incidents involve young children, but there was also a rise among older ones, including teens. But why the uptick in magnets being swallowed by teens? Shouldn't they know better? It turns out they're not gobbling magnets like younger kids. Instead, she says, they're mostly using them to mimic body piercings, like, say, a nose or tongue stud. And while these older kids are out looking cool, sometimes those little round magnets come loose. Next thing you know they're in the stomach or lower. Definitely not cool.

The truth about Small Bowel Obstruction

Small bowel obstruction (SBO) is a very common problem for patients; treated by many different types of medical providers, including primary care, emergency medicine, internal medicine, and surgery. In the United States alone, there are an estimated 300,000 laparotomies performed annually for SBO, and about one third of these obstructions are complicated by intestinal ischemia, with significantly higher morbidity and mortality resulting.

About 20% of people admitted to hospital with an acute abdomen (or an abdomen that quickly becomes firm, is tender to touch and painful), have an obstruction of their bowel. Of these 20%, the majority (80%) will have a small bowel obstruction.

Causes of intestinal obstruction may include fibrous bands of tissue (adhesions) in the abdomen that form after surgery; hernias; colon cancer; certain medications; or strictures from an inflamed intestine caused by certain conditions, such as Crohn's disease or diverticulitis.

An intestinal obstruction occurs when food or stool cannot move through the intestines. The obstruction can be complete or partial. There are many causes. The most common are adhesions, hernias, cancers, and certain medicines.