Where in health am I? : Home / Health Cloud / Challenges / Gastrointestinal / Meckel's Diverticulum 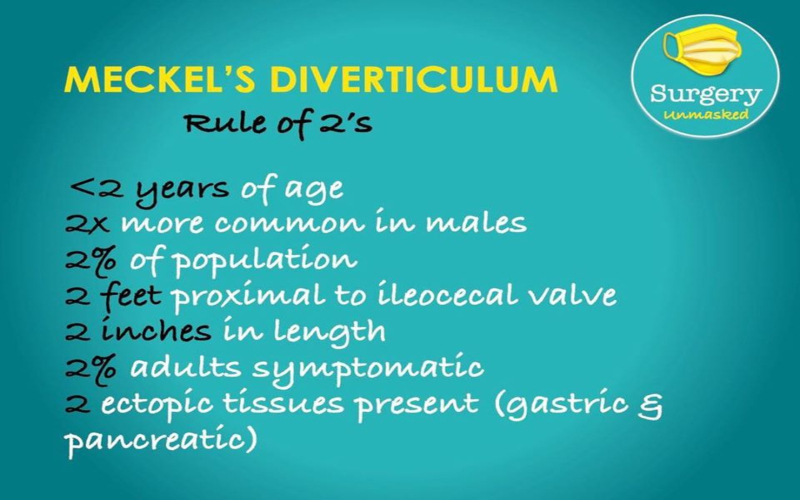 My youngest son, Ryan, has had a rough couple of months. He started having stomach cramps on Monday, May 16. Every day, at least once, but sometimes twice; he would lay on the floor moaning and groaning that his stomach hurt. Nothing helped it. When it quit hurting after 30 minutes or an hour, he would get up and go ride his bike, or go for a run, or whatever else he felt like doing...because he felt completely fine when his stomach wasn't hurting.

I was baffled. I didn't know how to help him. I offered multiple over-the-counter products, but nothing ever helped. He didn't seem sick and had no other symptoms. Trust me...I quizzed him about what was going on in the bathroom almost…

In the O.R., when the surgeon removed the damaged segment of small bowel, the cause of the problem became clear: The patient had what is known as a Meckel’s diverticulum. This is a common congenital abnormality — a remnant of a duct that normally provides nutrition to the embryo. In utero, it links what will become the umbilical cord to a primitive gastrointestinal tract and usually disappears before the fetus enters the second trimester.

Intussusception Secondary to a Meckel's Diverticulum in an Adolescent

Although there are many lesions that give rise to intussusception, Meckel’s diverticulum is the most common. A Meckel’s diverticulum is a remnant of the omphalomesenteric duct, which is normally obliterated by the 5th to 8th week of gestation. It is present in up to 22% of the population, but only 4% of those will have a complication in their lifetime .

Inverted Meckel's diverticulum as a cause of occult lower gastrointestinal hemorrhage

Meckel's Diverticulum in Adults: More Common Than You Think

Meckel's diverticulum is among the most common congenital defects of the gastrointestinal tract. Although often considered a disorder of childhood, it can also be diagnosed in adults. Meckel's diverticulum is often asymptomatic. When patients present with symptoms, diagnosis is complicated because the features are similar to those of many other gastrointestinal conditions, and traditional imaging studies often do not demonstrate an obvious abnormality. Management is evolving, and there is no consensus on the appropriate approach to treatment. This article discusses the pathophysiology, associated complications, and management options for this often-overlooked condition.

Meckel's diverticulum is the most common congenital malformation of gastrointestinal tract. It can cause complications in the form of ulceration, haemorrhage, intussusception, intestinal obstruction, perforation and, very rarely, vesicodiverticular fistulae and tumours.

Most children with Meckel’s diverticulum are asymptomatic. Complications of Meckel’s diverticulum are seen more frequently in those who present at a younger age and in male patients. The classical description of painless bleeding is more commonly seen in adult patients, whereas in children, especially those younger than four years of age, the presentation is more likely to be that of an obstruction, as was the case with the patients in our case series.

Radiologist's perspective for the Meckel's diverticulum and its complications

The Meckel's diverticulum is the commonest congenital anomaly of the gastrointestinal tract, often presenting with complications such as gastrointestinal bleeding, intussusception, bowel obstruction and diverticulitis, which are often misdiagnosed. Imaging plays an important role in the early diagnosis and characterization of these conditions and is very helpful in decision making.

A Meckel's diverticulum is a remnant of the yolk sack/umbilical cord that is supposed to dissolve shortly after birth. In two percent of the population it doesn't dissolve. It usually makes itself known within months of birth, by causing bleeding and extreme pain in infants, due to the fact that it produces acid. (The intestines are non-acidic.) Very rarely, they go undetected if they do NOT produce acid.

Meckel’s diverticulum is a rather common condition, occurring in 1 out of every 50 people. However, it is often difficult to diagnose. Some people with Meckel’s diverticulum never have any symptoms. Others may have symptoms that are mistaken for other disorders such as appendicitis (an inflammation of the appendix) or a peptic ulcer (sore on the stomach lining).

Sometimes a test called a Meckel’s scan is used to show your child’s intestine and whether it contains a certain type of tissue that can cause bleeding. The scan works by injecting a substance called an isotope into your child’s veins, which then travels through the blood supply to the intestine. A series of pictures are taken while the isotope is passing through the intestine. This scan may not always identify the pouch.

This is the vestigial remnant of the vitellointestinal duct. It is the most frequent malformation of the gastrointestinal tract. If present, it is located in the distal ileum, usually within 100 cm of the ileocaecal valve.