Where in health am I? : Home / Health Cloud / Challenges / Gastrointestinal / Vomiting

The act of vomiting deserves your respect. It's an orchestral event of the gut ― Mary Roach 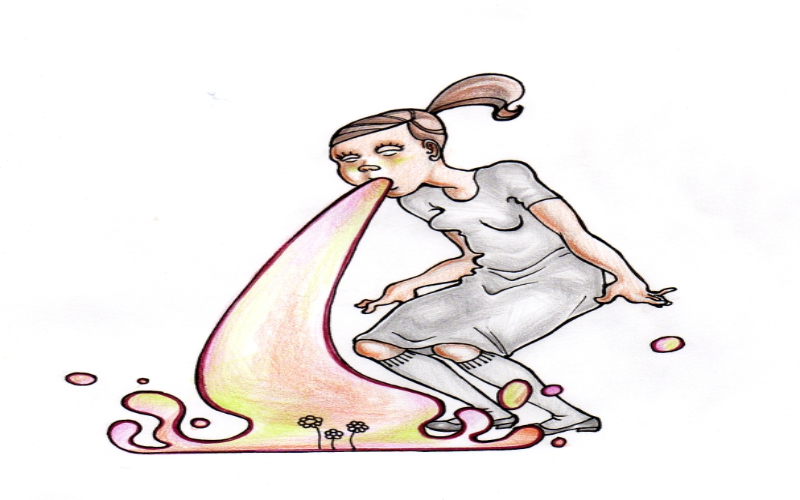 The beautiful act of vomiting

Vomiting may be one of most disgusting experiences you can have, but the physical processes behind it are actually beautifully choreographed. Even seeing another person vomit can make an otherwise well bystander start vomiting.

So why would a medical doctor work with biological scientists and engineers in North Carolina to build a vomiting machine — in fact, a projectile vomiting machine? They wanted to understand how Noroviruses spread through the air.

Vomiting is an involuntary and forceful expulsion of whatever happens to be in your stomach out through your mouth — and sometimes your nose.

There seems to be a vomiting centre in your brain known as the Area Postrema.…

This Is Why Being Anxious Makes Some People Puke

For those people who do have the anxious voms, relief can be found in different ways. Drew says his nausea and throwing up subsided as he treated his anxiety in therapy, but it didn’t go away completely, and he still had to find other ways of treating the symptoms.

The Queasy Truth About Why Kids Are So Prone to Vomiting

The mechanism of vomiting, or emesis, is the same in kids and adults. It can be stimulated by a variety of things, from a virus irritating the stomach lining, to disgust or surprise, to the motion of a car or a boat. But in kids it can be a hair-trigger reaction.

Cyclic vomiting syndrome is on the rise among adults, and marijuana use may be partially to blame.

As Norovirus Rages, A Robot Named 'Vomiting Larry' Gets His Closeup

Norovirus causes stomach distress — and then some — that can last a few days. Sometimes called the stomach flu, despite no connection at all to the respiratory influenza virus, norovirus is notorious.

How the vomit bag became part of every flight

Airlines have taken our pleasures one by one: They've reduced our seating, removed our snacks, and killed the free drinks. A new economy has torn even Skymall from our clammy hands. But one glorious amenity remains: the great American vomit bag.

Since I was seven years old, my life has been governed by a phobia of getting sick.

The Return of Droperidol...

Droperidol has evidence for efficacy in the treatment of nausea and vomiting, benign headache and migraine, and for the control of acute agitation in the Emergency Department. Its main side effects are sedation, extrapyramidal effects (primarily akathisia), hypotension (especially orthostatic), and prolongation of the QT interval (dose dependent). A black box warning for torsade de pointes was issued in 2001 for IVP doses >2.5 mg.

Vomiting in Babies: What's normal and what's not

Occasionally, vomiting can be a symptom of more serious illnesses. Call your doctor if you notice any of the following warning signs in your baby: •Signs of dehydration, including a dry mouth, lack of tears, sunken fontanelle, floppiness, and fewer wet nappies than usual (fewer than six nappies a day). •Fever. •Refusal to breastfeed or drink his formula milk. •Vomiting for more than 12 hours, or vomiting with great force. •A non-blanching rash, which is a rash that doesn’t fade when the skin is pressed. •Sleepiness or severe irritability. •A bulging fontanelle. •Shortness of breath. •A swollen abdomen. •Blood or bile (a green substance) in the vomit. •Persistent forceful vomiting in a newborn within half an hour of eating.

Vomiting in an infant 2 months or younger is very different than older infants and children. The top four causes of child vomiting are very difficult to distinguish at the onset because they all start out the same – profuse vomiting every 5 to 30 minutes for the first 1 to 12 hours. Understanding the various causes and expected course of these three will help you determine the cause.

Emetophobia is the abnormal and persistent fear of vomiting, thought to be the fifth-most common phobia in the world. The most extreme sufferers devote their lives to avoiding anything that might bring on illness — including seemingly innocuous everyday occurrences like a catered office lunch, an alcoholic drink, oyster happy hour, or a child in line at the supermarket complaining of a sore stomach.

Why Do We Barf? It's Complicated

Scientists understand how we throw up, but why we do it is a little more complicated.

The beautiful act of vomiting

Vomiting may be one of most disgusting experiences you can have, but the physical processes behind it are actually beautifully choreographed.

The Cyclic Vomiting Syndrome Association (CVSA) serves the needs of cyclic vomiting syndrome (CVS) sufferers, their families and professional care givers by raising awareness and providing education and support to those affected by cyclic vomiting, abdominal migraine and related disorders while advocating for and funding research.

We are a registered charity providing information and support to sufferers of Cyclical Vomiting Syndrome and their families.

Nausea and vomiting are not diseases, but rather are symptoms of many different conditions, such as infection ("stomach flu"), food poisoning, motion sickness, overeating, blocked intestine, illness, concussion or brain injury, appendicitis, and migraines.

Vomiting and nausea are common symptoms that accompany many diseases and conditions. Problems with nausea and vomiting are related to the cause. Nausea and vomiting from motion sickness, seasickness, food poisoning, or cancer therapy can result in loss of water and electrolytes, which can lead to dehydration. Vomiting and nausea known as morning sickness may occur during pregnancy.

Many different things can make kids throw up, including illnesses, motion sickness, stress, and other problems. In most cases, though, vomiting in children is caused by gastroenteritis, an infection of the digestive tract. Gastroenteritis, often called the "stomach flu," usually is caused by common viruses that we come into contact with every day. Besides causing vomiting, it also can cause nausea and diarrhea.

Nausea and vomiting may also be early warning signs of more serious medical problems, such as: •Appendicitis •Blockage in the intestines •Cancer or a tumor •Ingesting a drug or poison, especially by children •Ulcers in the lining of the stomach or small intestine