Where in health am I? : Home / Health Cloud / Challenges / Heart / Conditions / Valvular Conditions 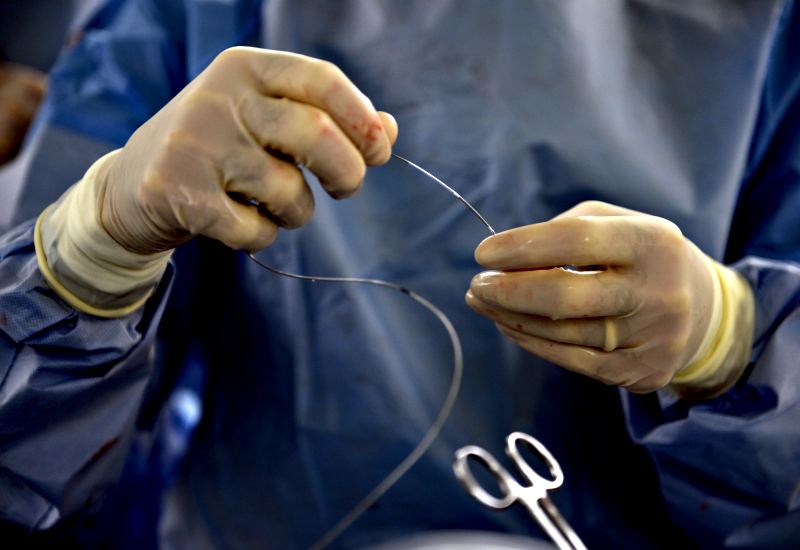 “There’s no such thing as being too Southern.”

It’s a Lewis Grizzard quote that truly encompasses him. Born and raised in Georgia, Lewis was a beloved columnist and humorist with the Atlanta Journal-Constitution. My wife went to high school with Lewis and millions of readers across the country knew him through his columns. His humor, self-deprecating observations about life and unapologetic reflections on old fashioned values made him a Southern icon.

In 1982, Lewis published a book titled “They Tore Out My Heart and Stomped that Sucker Flat.” Along with love and loss, he also talked openly about his congenital heart defect and preparing for surgery. When doctors told him they could give him a replacement heart valve from a hog, Lewis thought about his experience with hogs, which dated back to a classmate who occasionally rode a pet hog named Lamar to school, and his “voracious appetite for barbecue.”

“What would happen to me with hog in my heart? Every time I’d pass a barbecue restaurant, my eyes would fill with tears,” he mused.

Lewis calculated that at age 35, if the valve lasted about 10 years he could have more surgeries to keep living. If he made it to 75, he would “call it even.”

But for all the people that are saved through treatment or surgery, an estimated 22,000 people in the U.S. still die from HVD each year. A lack of awareness about the disease and the warning signs are a major contributing factor. In an Alliance for Aging Research study of 400 individuals with HVD, 6 in 10 said they were diagnosed only because they went to see a health care provider for a regular check-up or other issue. As many as 5 million Americans have been diagnosed with heart valve disease but three in four people surveyed know little to nothing about the disease. Many people first become aware of a heart valve issue when a heart murmur is discovered during a routine heart check with a stethoscope.

Lewis believed in raising awareness about heart health and co-starred in a public service announcement for the American Heart Association in 1990. With National Heart Valve Disease Awareness Day coming up on Feb. 22, it’s a good time to learn about this disease and encourage loved ones to seek out a health care professional if they have risk factors or symptoms.

The heart is a complex organ and unlike other conditions such as coronary heart disease, one can be at low risk for a heart attack but still have a bad heart valve. Left untreated, HVD could cause heart failure and become deadly. The heart has four valves that control blood flow in and out of the heart. When a valve is damaged or doesn’t open or close properly, the body receives less oxygen to function, resulting in HVD. The symptoms of HVD include shortness of breath; weakness or dizziness; pain, tightness, or discomfort in the chest; fainting or feeling faint; fatigue; rapid or irregular heartbeat; lightheadedness; decrease in exercise capacity; and swollen abdomen or ankles and feet.

Unless the symptoms are part of a recurring pattern, many people don’t realize that these are signs of something serious that needs medical attention. Without early diagnosis for a severe HVD condition such as aortic stenosis, the survival rate drops significantly. Two years after the onset of symptoms, patients with severe aortic stenosis have a survival rate as low as 50 percent. Older age is a major risk factor for HVD and it’s estimated that 1 in 8 people age 75 and older have moderate to severe HVD. Other risk factors include high cholesterol, high blood pressure, smoking or diabetes, which are similar to the risk factors for coronary heart disease. If you’ve had a previous heart condition, you are also at higher risk of developing HVD.

Sometimes symptoms don’t even appear or go unnoticed, even in severe cases. Patients and doctors may fail to notice the often subtle, small changes, and may even dismiss them as “normal” signs of aging. This makes awareness of the risk factors and symptoms especially important.

As National Heart Valve Disease Awareness Day approaches I hope Members of Congress will help spread the word and educate constituents about this disease. Stronger national awareness around HVD would go a long way in the fight against the disease. Rep. Tony Cardenas (D-Calif.) has introduced a resolution in support of National Heart Valve Disease Awareness Day to help elevate knowledge of the issues. The Centers for Disease Control and Prevention (CDC) provides information on rheumatic and congenital forms of the disease but does not currently list heart valve disease on their A-Z list. This is notable because the CDC is one of the government’s main sources of public health information. Education and prevention efforts would benefit from a dedicated CDC webpage on HVD.

We often talk about how preventive care and recognizing symptoms of serious conditions saves lives. In the case of heart valve disease, the numbers don’t lie. A 97 percent survival rate following heart valve repair or replacement surgery is amazing, but far too many people still die because their heart valve disease went unrecognized and untreated. The greatest medical innovations cannot “treat” a lack of public awareness. And, when it comes to heart valve disease, what you don’t know can hurt you.

While this field of research is promising and the first clinical uses of heart valves and blood vessels cultured using tissue engineering have already been made, there are still a few hurdles to get over before the technology can be routinely used. "One of the biggest challenges for complex implants such as heart valves is that each patient's potential for regeneration is different.

But in poor countries, strep throat often goes undiagnosed and can become a long, slow death sentence. Without treatment, it can lead to rheumatic fever and rheumatic heart disease, in which the immune system attacks the heart valves — intricate flaps of tissue that must open and shut properly 100,000 times a day for the heart to work normally. As the valves deteriorate, the heart struggles and gradually wears out. Patients become weak, short of breath and unable to attend school or work. Many die before they reach 30. Women with the illness who become pregnant can suffer severe and sometimes fatal complications.

A minimally invasive procedure to repair diseased heart valves delivered about the same health outcomes for patients as open-heart surgery, a result doctors say could widen use of the new procedure.

You know you need to show your ticker some TLC. Along with heart rate, blood pressure, and maintaining healthy arteries, you should also think about what you can do for your heart valves.

A Revolution for Heart Valve Jobs

Most cars need a valve job after 80,000 miles. Pick a good repair shop and they’ll do it in two days for under $1,000. You’ll get more power and better gas mileage. Valve jobs in human hearts also boost performance — but open-heart surgery is risky and costs 50-100 times more than repairing the Chevy. All that is changing fast.

Clot Risk Is Seen in Some Heart Valves

The Food and Drug Administration and leading cardiologists are warning that aortic heart valves from animal tissue—implanted surgically in thousands of patients world-wide—can develop tiny blood clots, causing the valves to function improperly.

During the past 15 years, transcatheter aortic valve replacement ushered in a new era of less invasive treatment for aortic stenosis. Now, the field of transcatheter interventions for mitral and tricuspid valve disease appears poised to undergo a similar revolution. Currently, a multitude of devices designed to treat mitral or tricuspid valve regurgitation are in development. Although the initial data are promising, physicians and researchers have a long road ahead...

Put down that new Apple iPad for a second to consider another technological leap. Soon some damaged heart valves will be repaired without cracking patients' chests and cutting into their hearts.

The updated guideline, published in the Journal of the American College of Cardiology and in Circulation, includes recent advances in diagnostic imaging and improvements in catheter-based and surgical interventions.

Why Arnold Schwarzenegger May Have Had To Get Open Heart Surgery

Nowadays, many heart valve procedures can be done without opening up the chest, using catheters instead. However, when the minimally invasive route is not feasible or successful or complications arise, surgeons have to then "crack the chest" open so that they have better access to the valve and the surrounding structures.

No Bad Rides: A Tiny Heart Valve Gave This Empty Nester a New Lease on Life

How Billy Ray got out of bed and back on his bike.

Narrowing the gap on heart valve disease deaths within our reach

We often talk about how preventive care and recognizing symptoms of serious conditions saves lives. In the case of heart valve disease, the numbers don’t lie. A 97 percent survival rate following heart valve repair or replacement surgery is amazing, but far too many people still die because their heart valve disease went unrecognized and untreated.

The Council is a multidisciplinary forum for the Heart Valve Team. We encourage research, knowledge exchange, teaching and other educational activities related to Valvular Heart Disease.

A complete understanding of heart valve replacement requires years of study and practice. Therefore, discussion of these topics with your physicians will provide the foundation for therapeutic decisions you or a loved one will soon make.

Welcome to the #1 doctor recommended website for patients created by Adam Pick, a heart valve patient. Get prepared, learn what to expect, avoid stress, and enhance recovery using resources designed for you.

If one or more of your heart valves becomes damaged or diseased, it can affect the flow of blood through your heart.

Most cases of valvular heart disease can be detected with a stethoscope. The abnormal blood flow often produces a sound called a heart "murmur". Not all murmurs are abnormal, nor do they necessarily indicate heart disease, but the trained ear can often tell a lot about valvular problems just with this simple device.

Valve disease can develop before birth (congenital) or can be acquired sometime during one's lifetime. Sometimes the cause of valve disease is unknown.

Valve problems can be present at birth or caused by infections, heart attacks, or heart disease or damage. The main sign of heart valve disease is an unusual heartbeat sound called a heart murmur.

If the narrowing or leakiness is mild, and you have no symptoms, then you usually do not need any regular treatment. If you develop symptoms or complications, various medicines may be advised to ease the symptoms. Surgery to stretch, repair or replace the valve may be needed in some cases. Surgical treatment has greatly improved the outlook for many cases of severe valve disease.