We think that EKG screening can be as approachable as taking blood pressure - Judy Wade, AliveCor President and CEO 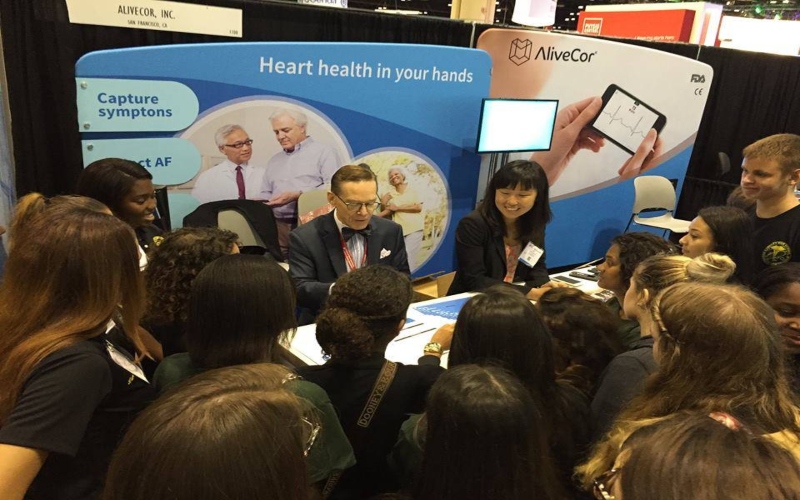 Think of the stereotypical representations of medicine, as they might appear on a television show: the crisp white coat, of course, and the stethoscope dangling at the ready. Syringes and intravenous lines, maybe. An X-ray or a CT scan slammed theatrically into a light box.

But any medical scene is incomplete without an electrocardiogram (EKG) machine running in the background, its jagged line tracing across the screen reassuringly, or alarmingly to cue a dramatic threat. The EKG is the backbeat of many hospital scenes on television. Important medical things are happening here, it says.

To tap into that potent association, many private medical practices, urgent-care clinics, community hospitals, technology companies, and health-care-product designers use EKG imagery in their advertising. Most of those images bear little resemblance to actual EKG tracings. The spikes and bumps generated for signs or emblems (like the logo of the daytime talk show The Doctors, for example) mostly amount to arbitrary peaks and valleys. They do not reflect the output of a human heart, healthy or diseased.

But accuracy might be less important than allegory. Like the white coat or the caduceus, the EKG has become talismanic, more valuable for the symbolism it provides than any diagnostic information it can convey. Now that EKGs are making their way into smartwatches, their symbolic purpose could risk overtaking their medical one.

Wearable medical technology promises a new, and better, way to manage personal health. Whether it’s Fitbits counting steps and calories burned, blood glucose monitors aiding insulin dosing for diabetic patients, or Bluetooth earpieces offering round-the-clock heart rate and body temperature tracking, wearable devices sell the promise of the coldly clinical made portably intimate. Intermittent EKG monitoring, like that available in the latest Apple Watch, might seem like a small technological leap, putting what was once the sole purview of hospitals and doctor’s offices neatly around a consumer’s wrist.*

But EKG monitoring is a little different from other, more discrete medical information. Unlike devices that measure more cleanly numerical metrics—step counts or target heart rates or blood glucose levels—a wearable EKG display doesn’t give the user an easy sense of hitting targets or falling short. Reading an EKG tracing is nuanced and interpretive, more art than math. A Fitbit gives you a number. An EKG paints a picture.

The 12-lead EKG, the gold standard of the diagnostic, measures the flow of current from 12 points on the patient’s body, offering a 360-degree view of the heart’s electrical activity. Its tracing reports the patient’s heart rate, rhythm, and regularity. Because the various parts of the heart produce different shapes of electrical activity owing to their size and muscularity, the EKG can also detect which chambers are beating at what time, and whether these chambers are correctly synced up and beating effectively. The larger a muscle is, the stronger its electrical impulses, so the size of an EKG wave can also indicate whether parts of the heart muscle are enlarged or dangerously thickened.

The most urgent diagnostic use of the device determines the presence and location of cardiac damage due to decreased blood flow. Areas of the heart getting less oxygen will show changes in their electrical conduction, and the 12-lead EKG provides real-time information: not just indicating whether a patient is having a heart attack, but also which coronary vessels are most likely blocked. The 12-lead EKG can also detect the location of scarring left behind by prior, sometimes silent heart attacks. An EKG tracing will clearly show an area of dead heart muscle no longer conducting electrical signals. Dead meat don’t beat, as cardiologists put it.

Still, there’s plenty that a snapshot EKG can’t do, including diagnosing intermittent problems with rhythm or changes that only occur with certain activities. An EKG doesn’t capture the shape or function of the heart’s valves, nor can it diagnose precarious plaques in the coronary arteries that could signal heart attacks waiting to happen.

The fewer number of leads an EKG has, the less information it can give you. A one-lead EKG, such as the kind that appears in the latest iteration of the Apple Watch, gives just a single vantage point. For the diagnosis of some cardiac abnormalities, that might be akin to only solving one side of a Rubik’s Cube. A watch endowed with this kind of EKG feature likely won’t have a large public-health impact, despite promotional materials from Apple touting the “momentous achievement” of a wearable “that can provide critical data for doctors and peace of mind for you.” Apple’s not alone, either. Another smartwatch-EKG offering, from Withings, promises “the opportunity to take an ECG anytime and anywhere.”

Withings was unable to be reached for comment, but Apple pointed to a statement from its vice president of health, Dr. Sumbul Desai. Desai contends that features such as the EKG “help users have more informed conversations with their physicians.” But evidence does not suggest that taking EKGs for asymptomatic individuals is beneficial. The average wearable user might be even less likely to benefit. A few years ago, the typical Apple Watch owner was a 40-year-old male. That might change over time, but even so, the Centers for Disease Control and Prevention maintains that only 2 percent of patients younger than 65 suffer from atrial fibrillation, the only arrhythmia that the Apple Watch is approved to detect.

Despite the bluster, these devices aren’t entirely new. “Personal” EKGs have been available for years in the form of thumb-drive-sized, portable monitors whose fingertip sensors can pull a one-lead EKG tracing and sync the recording to a tablet or smartphone. That’s less convenient than a smartwatch, to be sure, but diagnostic utility might not be the most important outcome. By incorporating an EKG into smartwatches and their marketing, Apple and other electronics makers use EKG to brand their watches, in the way that health-care providers use them to establish trust in their clinics, or television shows deploy them to communicate medical professionalism. Even when rendered nonsensically or in bulk, such as the sloppy, narrow-range raw data a watch or portable monitor might generate, an EKG feels weighty and complex, standing in for doctors and their expected acumen. Don’t worry, the purveyors of an EKG are communicating, we’ve got this.

The history of the EKG has always pitted cutting-edge medical advances against the placebo of quasi-medical reassurance. The first electrocardiograph was developed in 1901 by Dr. Willem Einthoven, a Dutch cardiologist. Einthoven’s original “string galvanometer,” which weighed approximately 600 pounds, required five skilled operators and a ready supply of water to cool its massive electromagnets. The machine was virtually impossible to use and its readouts equally difficult to interpret, yet it became a near-immediate sensation in the medical world, and Einthoven won the Nobel Prize in Medicine for the contribution.

The modern 12-lead EKG is more streamlined, and the future (if the current crop of wearables is any indication) promises further downsizing of the device, with even more potential for unobtrusive integration into daily life. But whether it is room- or wrist-sized, the EKG has always attempted to record the size, shape, and timing of the heart’s intrinsic electrical impulses, giving people the ability to review, track, and potentially intervene on its functions. Put differently, the EKG tries to reframe the heart as a machine that can be monitored and, to some extent, mastered.

Shrinking and wearing an EKG is a symptom of technology’s drive to subsume health and wellness, and it renews a belief in humanity’s mastery of the heart, that most important muscle. EKGs might start to seem capable of producing meaning on their own, instead of producing pictures that can be interpreted by medical professionals.

That aligns the single-lead, wearable EKG with the set designer’s intentions for the symbol. The EKG—especially the 12-lead device—offers real diagnostics, but not nearly as often as its traces convey the symbology of health. As it shrinks, that secondary meaning could become more primary. The wearable EKG offers the comforting weight of medicine itself, worn on the wrist like an amulet warding off evil, whether it ever gets used or not.

Source: Andrew Bomback & Michelle Au, Smartwatches Are Changing the Purpose of the EKG, The Atlantic, February 17, 2019.

Can a Smartwatch Save Your Life?

The advent of wearable devices that monitor our heart rhythms both excites and worries doctors.

Apple Watch ECG vs. hospital EKG: Not the results I was expecting

Apple Watch Series 4 has two FDA-cleared heart features that can warn about life-threatening conditions. Here's what happened when I tested Apple's ECG against a medical-grade EKG.

There are so many handheld ECG devices now available that choosing which one to get can be daunting and not easy! To begin with, choosing a device depends partly on whether you are (1) a medical provider (physician, clinic, etc.) looking for a device to prescribe or send out with your patients or (2) a layperson with various understanding (from little or none to much) about the subject of ECG.

Is Your Heartbeat Off, or Blood Sugar High? On the Road, You Can Keep Track

Dr. Frisch said the quality of recordings from the Kardia and the latest Apple Watch were very similar and provide a single view of the heart that is “an approximation” of the standard EKG. But Kardia is coming out with a new device, the KardiaMobile 6L, which Dr. Frisch said would allow doctors to view the same heart rhythm from six different angles. Users rest the 6L on the bare skin of either their left knee or their ankle and hold it in place with two fingers for 30 seconds.

What you should know about personal EKG devices

Keep in mind that these devices rely on just one or two points of contact, or leads, to track heart activity. Hospital EKGs use 12 leads and are more reliable and accurate. Don’t panic if you have an unusual reading; share the information with your doctor, who can then confirm or negate the validity of the finding.

Smartwatches Are Changing the Purpose of the EKG

Now that EKGs are making their way into smartwatches, their symbolic purpose could risk overtaking their medical one.