Where in health am I? : Home / Health Cloud / Challenges / Heart / Devices / Coronary Stents

We’re going to have a hell of a time putting the genie back in the bottle. It’s a $15-$20 billion industry. You have huge vested interests that are going to push you back - Dr. Salim Yusuf 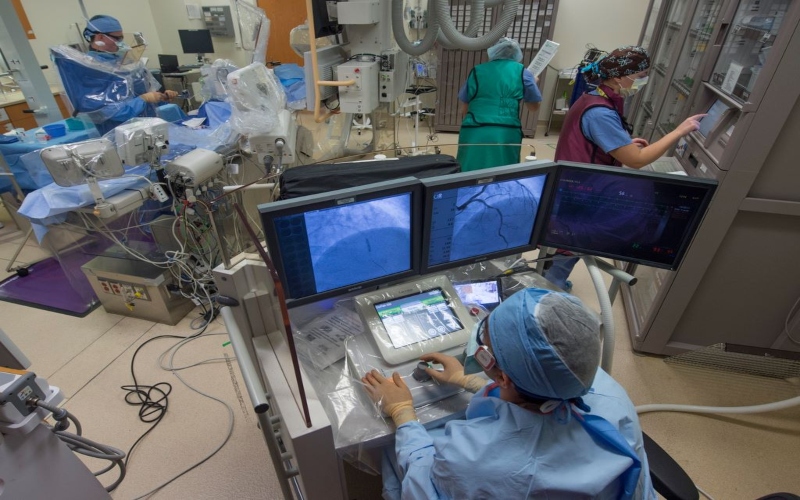 Nearly every day for the past month Roxana Mehran, an interventional cardiologist at Mount Sinai Hospital in New York City, and her colleagues have been getting calls from patients wondering if their stents were really necessary.

Yes, the doctor assures them, they were prime candidates to receive a stent, a small device used to prop open clogged arteries in patients with cardiovascular disease.

Dr. Mehran, who is chair of the American College of Cardiology’s Interventional Council, says she told one such patient, “Don’t worry, I made sure with the physiology test. You were having three to four episodes of chest pain a week. You couldn’t walk two blocks.”

A study in the journal the Lancet in November has fueled an already contentious debate within cardiology over which patients really need stents. Doctors are far from a consensus on the matter. Lost in the fray: confused and concerned patients.

Stents are implanted during angioplasty procedures called percutaneous coronary interventions, or PCIs. Over one million stents were implanted in U.S. patients last year, according to the American College of Cardiology’s national registry of heart catheterization facilities, which encompasses about 85% of facilities in the U.S.

Most cardiologists agree that in patients with acute coronary syndrome—those who have a heart attack or frequent chest pain—stents can be a lifesaver.

It’s in patients with stable angina, or chest pain that occurs only when they exert themselves, that questions remain.

The new Lancet study was conducted by researchers in the U.K. and was nicknamed the ORBITA trial. It found that patients with stable chest pain who received stent devices had no statistically significant improvement in their exercise time on a treadmill when compared with patients who received no stents during a fake procedure.

All the patients took heart drugs for six weeks before their procedures.

Doctors perform about 500,000 PCI procedures every year world-wide on patients with stable angina, according to the study. Studies have estimated that 20% of those surgeries in the U.S. are done on that subset of patients.

Long criticized as an overused procedure and an example of waste in the health system, the unnecessary insertion of stents fell by about 50% between 2010 and 2014, according to a 2015 study published in JAMA.

The drop followed new guidelines issued in 2009 that discouraged stent use in patients with stable disease and minimal symptoms of chest pain.

The Lancet study included only patients with one narrowed artery. Patients had chest-pain symptoms for over eight months, though about 10% had no further chest pain after being treated with medication for six weeks. They were still included in the study.

Doctors perform over 20% of angioplasty procedures on U.S. patients with stable angina who have no symptoms, says Rasha Al-Lamee, lead author of the Lancet study and an interventional cardiologist at Imperial College London.

But Dr. Mehran notes that some patients had a borderline lesion, which is an artery that is 50% to 70% blocked. “This was really a healthy patient population,” she says. “These are not the patients we see every single day.”

Ian Meredith, chief medical officer at Boston Scientific, a leading maker of stents, says that there is a wide spectrum of symptoms in patients with stable angina and that some patients can’t tolerate taking multiple heart medications.

“Certainly medications are the desired therapy for people with a low burden of symptoms and who are coping pretty well with their daily living,” he says.

As to the broader question of whether too many patients are getting stents, Dr. Bhatt says it depends on which category of heart patients you look at.

“The majority of stents go in for acute coronary syndromes,” he says. “In that situation, if anything there’s an issue of patients being undertreated, especially the highest-risk patients.”

Dr. Bhatt says the use of stents for stable coronary artery disease has gone down ever since the landmark 2007 trial was published. “I don’t think there’s this vast overuse of stents,” he says. (He adds that he has no financial ties to any stent makers.)

But David Brown, a professor of medicine at Washington University School of Medicine in St. Louis, wrote a strong accompanying editorial in the Lancet saying it showed “unequivocally that there are no benefits for PCI compared with medical therapy.”

Dr. Brown hopes clinical practice will change as a result. He says most patients with stable angina likely have obstruction of their microscopic arteries, so stenting of the large vessels wouldn’t relieve symptoms.

Some experts say they are awaiting the results of a large, federally funded trial.

Judith Hochman, senior associate dean for clinical sciences at NYU School of Medicine, says the trial is nearing completion of randomizing 5,000 patients from 35 countries. The patients will be assigned to one of two groups. One will receive medical therapy and an angiogram to see if they need a stent or surgery. The other will only get medical therapy.

Unlike previous trials, researchers conducted stress testing on all patients to ensure they have at least moderate ischemia. Most patients have more than one diseased artery or vessel.

Doctors will follow the patients for an average of 3.5 years.

Dr. Hochman says she was surprised the ORBITA trial didn’t show even an incremental value over the placebo effect of receiving a stent. “One would have thought that there would be some improvement,” she says. “This sort of reaffirms that people with single-vessel disease in general, with mild angina and good exercise tolerance, don’t need a PCI. People like this are undergoing PCI and maybe this will reduce the use of unnecessary PCI.

In a country where 30 million people suffer from cardiovascular problems and over two million die of heart attacks and strokes each year, stents have become essential. Every year, over 200,000 heart surgeries take place in the country. But this demand has stoked a racket of extraordinary proportions: Government data published last month showed that hospitals in Asia’s third-largest economy could be selling stents at margins of up to 654%. Not any more, though.

Why are so many people agreeing to an expensive procedure — and putting themselves at risk — for a placebo effect?

The average person with multiple diseased arteries in the heart does slightly better following coronary artery bypass surgery than after having stents inserted, a new study suggests, but the optimal procedure varies by patient. Researchers found slightly more heart patients survived at least five years after bypass surgery - 74 percent, versus 72 percent of those who had a stenting procedure, known as angioplasty. However, people who had no diabetes or heart failure and were non-smokers tended to have better outcomes with angioplasty than with more invasive surgery, the study team reported Monday in the Annals of Internal Medicine.

Not all heart blockages lead to heart attacks. Learn why stents are overused and not always inserted for the right reasons. The 4 questions you need to ask your doctor.

But far too often, studies show, stents continue to be implanted in patients who stand to gain little if any benefit.

Putting Stents to the Test

But while stents unquestionably save lives of patients in the throes of a heart attack or a threatened heart attack, there is no convincing evidence that stents reduce heart attack risk for people suffering from the chest pains known as stable angina.

The long-awaited study that looked at an inexpensive, non-invasive way to treat the No. 1 killer in America, heart disease, has been completed and it proved that the treatment works.

The latest salvo in the battle over stents -- the tiny mesh sleeves designed to keep clogged coronary arteries open -- came in the form of a study suggesting that the devices are better for some patients than medicines alone.

Stents to treat blocked heart arteries are not an easy fix

What DrRich implies with his sage advice is that just because a blockage exists; that we see it visually, does not mean that it needs to be squished open with a metal scaffolding.

The Power of the Placebo

A recent study revealed that stents are likely ineffective at relieving chest pain. Why didn’t we know that?

Stents are commonly used for stable chest pain — but the devices may not be helping.

In conclusion, we advocate the use of DCBs in all emergency and routine angioplasty where viable with the use of DES when required as a bail-out technique only. This is based on a lack of evidence to suggest coronary stents have any implication on mortality, an ongoing problem (despite advances in technology) with ISR and target lesion revascularisation and promising local data within our trust.

What it's like: How it feels to get a heart stent

A stent will support the inner wall of your heart's blocked artery, while the angioplasty procedure helps restore blood flow through the artery or arteries that were blocked.

The new study, published in the Lancet, stunned leading cardiologists by countering decades of clinical experience. The findings raise questions about whether stents should be used so often — or at all — to treat chest pain.

Some doctors say medication can treat mild cases of clogged arteries as well as surgery, while others remain believers of angioplasty procedures called PCIs.

Angioplasty.Org was created in 1997 as a way of celebrating the first two decades of interventional cardiology and to serve as a community, information source and historical archive for cardiologists and other healthcare professionals. We featured original video interviews with renowned physicians and researchers, news and discussion of controversial issues. However, unlike most physician websites, we decided to remain open and noncommercial. No passwords, no "doctors only" registration, no industry advertisements.

Like angioplasty, coronary stents physically opens the channel of diseased arterial segments, relieves the recurrence of chest pain, increases the quality of life and reduces other complications of the disease.

Angioplasty is often combined with the permanent placement of a small wire mesh tube called a stent to help prop the artery open and decrease the chance of it narrowing again. Some stents are coated with medication to help keep your artery open (drug-eluting stents), while others are not (bare-metal stents).

Stents usually are made of metal mesh, but sometimes they're made of fabric. Fabric stents, also called stent grafts, are used in larger arteries. Some stents are coated with medicine that is slowly and continuously released into the artery. These stents are called drug-eluting stents. The medicine helps prevent the artery from becoming blocked again.