It seems like the most obvious thing in the world: Generating more data about how your heart is working must be good, right? - Lola Fadulu & Alexis C. Madrigal 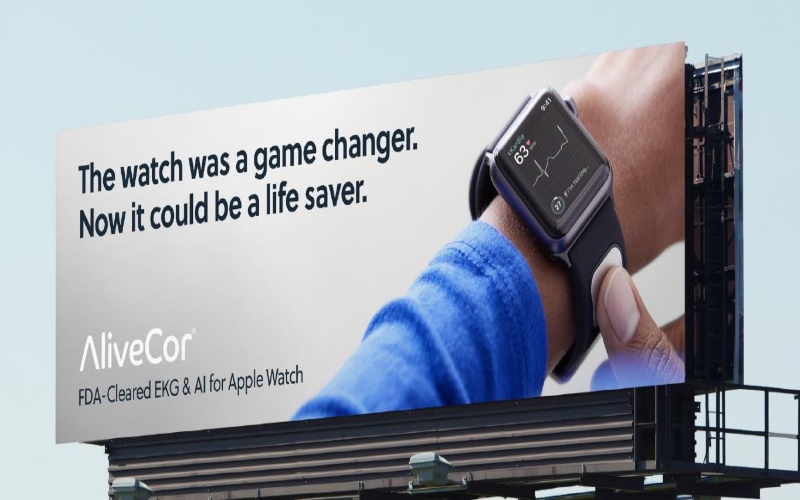 On a recent Saturday, my 87-year-old mother was feeling a bit woozy, so she pressed a button on the side of her Apple watch to reveal her ECG, a recording of her heart’s electric rhythm. Thirty seconds later, three messages appeared on the watch’s screen. One showed the characteristic zigzag spikes of the ECG, or electrocardiogram. The second revealed that her heart rate, usually 80 beats per minutes, was down to only 40. The third said the results were “inconclusive,” with the advice: “Call your doctor.”

My mother is a hardy octogenarian. She walks about a mile every day, works out with a trainer (currently via Zoom) three times a week and, as she often used to say, planks nearly as well as her former sorority sister, the late Ruth Bader Ginsburg.

After leaving a message with her doctor’s office, she called my brother, a doctor who lives nearby, and told him she was exhausted and “just not feeling right.” He came over immediately and took her to the emergency room.

There, the hospital’s electrocardiogram, which provides a more detailed readout than the watch, showed that the electrical signals in the top part of the heart were not being transmitted properly to the bottom. Her heart was beating, but too slowly. The staff rushed her to the cardiac care unit, where doctors implanted a pacemaker the next morning.

When she called a longtime friend to tell her the story, the friend responded that she’d likewise had a recent smartwatch scare: her heart rate was sky-high, reaching 182. Her doctor had her wear a Holter monitor, a medical-grade portable ECG device that monitors heart rhythm continuously, for four days and advised her to keep a diary of symptoms, such as chest pain or a skipped heartbeat. She didn’t notice any, and the report from the Holter device revealed that everything was fine.

The advent of smartwatches that retrieve heart physiology both excites and worries physicians. In addition to Apple, a number of companies make wearable ECG monitors for home use, including Samsung, Withings, Fitbit and AliveCor. And for every story like my mother’s, in which a warning leads to the placement a potentially lifesaving pacemaker, there are many more like her friend’s, in which minor variations in heartbeats lead to needless work-ups, treatments with risky side effects and lots of unnecessary anxiety.

So are these wearables worth it?

Conclusive evidence about their accuracy and cost effectiveness is lacking, though an Apple-sponsored study from 2019 published in The New England Journal of Medicine suggested they may help to detect some kinds of abnormal heart rhythms, particularly in the elderly. A slew of additional studies are underway, including ones to assess whether a smartwatch can actually help to save lives, or whether mobility measures such as step count lead to fewer heart attacks and hospitalizations.

Most of these at-home ECG watches are designed to record heart rate and detect atrial fibrillation, the most common irregular heart rhythm, which affects up to six million Americans. A-fib, as it’s called, increases the risk of strokes, leading to 150,000 deaths and 450,000 hospitalizations a year. But doctors say that many people have an irregular heartbeat every now and then that doesn’t have clinical implications.

Like many new technologies that uncover things in the body that doctors don’t yet fully understand, these devices may alert the user about an irregular heartbeat, but not all irregularities are dangerous. “It’s like we just invented the microscope and are seeing microorganisms, and we don’t know what they are,” said Dr. Harlan Krumholz, director of the Center for Outcomes Research and Evaluation at Yale. “We are seeing things, and we aren’t sure if it denotes extra risk.”

Most watches wait to send an alert until there have been about five abnormal beats within an hour or so, rather than after every altered rhythm. Still, that doesn’t mean the abnormality is dangerous.

“As a cardiologist, I really like at-home devices,” said Dr. Gary Rogal, medical director of cardiovascular services at RWJBarnabas Health in West Orange, N.J., whose team cared for my mother. But he clarified he likes them only for patients in whom he feels there’s an indication to look for something, such as those with an existing heart condition or a family history of heart disease. “I would never subscribe to the concept that everyone should be monitored. You’ll see stuff and it will make you crazy, but you’re probably fine.”

The American Heart Association agrees that smartwatch monitors could be beneficial, even lifesaving, for some, but Dr. Mariell Jessup, the group’s chief science and medical officer, said, “we do not have enough data yet to recommend it for everyone.”

Even electrocardiograms performed at a doctor’s office aren’t routinely recommended for everyone. The U.S. Preventive Services Task Force, a group of experts that advises on screening tests, says there is not enough evidence to show that routine ECGs are effective and worries about the costs, and potential dangers, of further testing.

And doctors worry that as more and more people wear these devices that might spot meaningless heart arrhythmias, there could be a flood of unnecessary follow-up testing and too much treatment.

“That’s what keeps me up at night,” said Dr. Joseph Ross, a professor of medicine and public health at Yale who is among a team of investigators conducting a randomized clinical trial that compares a group wearing the Apple watch to a control group wearing a smartwatch without the ECG app. “If someone with an occasional abnormal rhythm that would never have caused a stroke undergoes an extensive work-up or is put on a blood thinner, the risk of a dangerous bleed or other harm outweighs the benefits of potentially preventing a stroke.”

Dr. Steven Lubitz, an associate professor of medicine at Harvard Medical School and cardiologist at Massachusetts General Hospital, fears that customers will think the watches provide a safeguard for overall heart health and assume, for example, they check for signs of heart attacks, which they do not.

“Your mother’s story is the hope for all of these devices. In her case, the technology led to a diagnosis of a dangerously slow heart rate,” he said. “To date, most of the tech work on heart rate has been focused on detecting A-fib. Similar rigor may be required to validate the detection of other health conditions.”

We may be on the verge of entering a new era of medicine in which patients can glance at their wrists to check their emails and heart rhythms and notify their physicians if something seems awry. In the perfect health care world, cardiologists envision a day where they can prescribe a watch or other small clip-on device to high-risk patients and insurance would cover the cost. Otherwise, the advent of new technology would only help those who can afford it, exacerbating health inequities.

As Dr. Ross noted, “I want to see more scrutiny, to know whether these digital devices that consumers can purchase are making our patients’ lives better.”

Two weeks after her surgery, my mother was doing her one-minute planks and lifting weights with her Zoom personal trainer. Maybe, without the watch, my mother would have been OK and just felt really tired until she called her doctor on Monday. Or maybe not.

Can a Smartwatch Save Your Life?

The advent of wearable devices that monitor our heart rhythms both excites and worries doctors.

Some healthcare experts are skeptical that Fitbit wearables can continue to play the fast follower and maintain a strong market position in the face of increasing innovation from Apple Watch.

If you're truly concerned about accurate heart rate measurements, you should definitely look into medical-grade options instead of relying solely on a smartwatch.

How Exactly Does a Fitness Tracker Monitor Your Heart Health?

We tapped an expert to break down how a heart rate monitor works—and who should invest in one.

Withings introduced multiple wearables at CES today, including a new watch that can take electrocardiograms (EKGs) and has an estimated 12 months of battery life. That’s a lot. The Move ECG is part of the new Move line, and it includes an EKG to measure heart rhythm patterns.

Should Your Watch Monitor Your Heart?

Apple’s new watch can screen for heart problems. But doctors are increasingly worried about the dangers of testing healthy people for disease.

Apple's Heart Study Is the Biggest Ever, But With a Catch

Now, not for the first time, Apple's attention to user experience has been rewarded: According to a paper outlining the study's design in this week's issue of the American Heart Journal, Apple and Stanford have managed to enroll a staggering 419,093 participants. That makes it the largest screening study on atrial fibrillation ever performed.

Can a smart watch save you from a stroke?

Join an ambitious study to detect the most common heart arrhythmia using your smart watch. Contribute your data and save lives.

Here’s the data behind the new Apple Watch EKG app

When the new Apple Watch heart monitoring app can get a reading, it can accurately detect that a person has an irregular heart rhythm known as atrial fibrillation 99 percent of the time, according to a study of the new device that Apple submitted to the Food and Drug Administration.

The Apple Watch is evolving into a legitimate medical device

Once the 30 second recording is completed, the Kardia app on the Apple Watch takes about 5 seconds to process the information using an AI algorithm and then makes a determination of normal sinus rhythm (NSR), atrial fibrillation or unclassified

What is atrial fibrillation, and why is your watch telling you about it?

We explain why Apple's decided to go after a condition you may never have heard of.

Wearable Health Monitors: Do They Work?

Doctors can also use the monitors to diagnose patients with intermittent episodes of a-fib, which are hard to catch, and follow up on patients who have had ablations, a procedure that removes diseased tissue from the heart to try to stop a-fib symptoms.

One company is trying to find a way to diagnose severe heart attacks before patients even arrive at the hospital. Preliminary results presented at the 2018 American Heart Association’s Scientific Sessions in Chicago this weekend show that a smartphone app developed by the Silicon Valley-based startup AliveCor may be able to identify heart attacks at home. Specifically, it could detect a type of heart attack caused by complete blockage of an artery—referred to medically as an ST segment elevation myocardial infarction (STEMI)—almost as effectively as an in-hospital electrocardiogram (ECG).

The Watch Is Smart, but It Can’t Replace Your Doctor

Apple has been advertising its watch’s ability to detect atrial fibrillation. The reality doesn’t quite live up to the promise.

If you’re trying to get fit, lose weight or improve performance at your favourite sport, it’s well worth adding a heart rate monitor to your gym kit. Tracking your BPM before, during and after training provides fantastic insights that can make your workouts better targeted, more effective and even more fun. Yes, we did say fun.

In a massive push to join Apple’s cardiac research ranks, Fitbit launched an ambitious study Wednesday to test whether its wearables can be used to detect a common heart problem known as atrial fibrillation.

The future of health is on your wrist.