If you choose to be screened and the doctor tells you that your are destined to have a stroke without surgery, run as fast as you can – in the opposite direction - Steven Willing 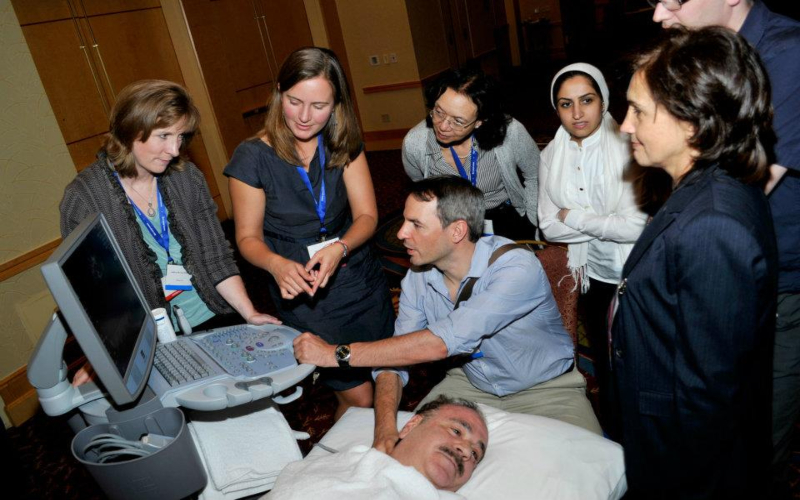 image by: American Institute of Ultrasound in Medicine (AIUM)

In this Point-Counterpoint Dr. Zierler and Dr. Berland provide their views on this controversial issue. From my perspective the debate must revolve around the following questions: The gist of the USPSTF statement seems to be that screening is being performed only to detect patients with critical carotid stenosis so that an intervention (CEA or CAS) can be performed.

However, shouldn’t screening also be used to identify atherosclerotic burden in order to prevent cardiovascular morbidity? Whatever the reasons for screening, should national health systems pay for screening? If not, what about individual physicians charging for screenings on selected/nonselected patients? What about…

The Scan That Saved My Life

After decades of exercise and healthy eating, a reporter’s blocked artery came as a shock; the debate over testing to prevent debilitating strokes.

The USPSTF recommends against screening for asymptomatic carotid artery stenosis in the general adult population.

Carotid artery ultrasound: Should you have this test?

This screening test is simple and painless, but it isn't appropriate for most people.

So far, screening to detect narrowed but symptom-free arteries hasn’t been shown to improve outcomes compared with using the best methods of identifying risk factors.

Why is the management of asymptomatic carotid disease so controversial?

Despite level I evidence supporting a role for carotid endarterectomy (CEA) in the management of patients with asymptomatic carotid disease, there is surprisingly little international consensus regarding the optimal way to manage these patients.

A Common Test to Screen for Stroke Risk Is Under Review

Dr. LeFevre says the concern isn't that the ultrasound itself is dangerous, but rather that it can lead to "a cascade of events" that "do more harm than good." In some cases, Dr. LeFevre says, patients may receive an angiogram to confirm findings of the ultrasound, and the dye used in that test can put them at risk of a stroke. Carotid surgery itself is associated with a 3% rate of stroke or death within 30 days.

Can You Do Too Much to Prevent a Stroke?

Currently, some experts say, far too many people who are free of symptoms that might herald a stroke are undergoing surgery to ream out carotid arteries that feed the brain, or are having stents inserted in these arteries, than is justified by available evidence.

Carotid artery ultrasound screening also is plagued by less than stellar accuracy. “When screening ultrasound is applied to millions of people over the age of 60, the exam will identify at least as many false positives as true positives,” says Timothy P. Murphy, MD, of Warren Alpert Medical School at Brown University in Providence, R.I. And some of these patients may head down a slippery slope toward revascularization. Although stenting may be a viable treatment for carotid artery stenosis, for most patients, CEA is the only option, as Medicare and most private payers do not currently reimburse for stenting of asymptomatic disease.

If you choose to be screened and the doctor tells you that your are destined to have a stroke without surgery, run as fast as you can – in the opposite direction. No one can predict who will have a stroke, and the chance you will not have a stroke in the next five years is about 90%.

Neurologist and spokesman for the Stroke Foundation, Associate Professor Tim Kleinig, said his group did not endorse Strokecheck or support unnecessary medical tests. "Carotid artery screening for stroke prevention is a highly controversial area and is not endorsed by national or international guidelines," he said.

Absence of a direct causal relationship between carotid artery stenosis and ipsilateral stroke, and the increased morbidity associated with carotid revascularization, support the argument that prophylactic carotid revascularization might be of no benefit in asymptomatic patients undergoing CABG. This area, then, is clearly in great need of further research.

Hospitals promote screenings that experts say most people should not receive

edd1a7fb557d_story.html?noredirect=on&utm_term=.88b9a9338e32 Screening proponents acknowledge that serious problems are found in fewer than 1 percent of those tested, but they say the efforts are worthwhile because they spur important discussions between patients and doctors.

Is Ultrasound Sufficient for Vascular Imaging Prior to Carotid Endarterectomy?

In an ultrasound laboratory where accuracy and reliability are established and annually reviewed (as in accredited laboratories in the United States), this technique can be reliably used for determining carotid stenoses 50% to 99%, if the results of the technical recordings are clear and indisputable. However, this should then be confirmed, either by a separate examination by another blinded technician, or by comparison to the previous ultrasound examination from the referring physician.

My 40-Second Screening for Heart Disease

Unfortunately -- or fortunately, depending on your point of view -- my report turned out to be relatively uninteresting. It showed a clear pathway for blood to flow through, and my artery walls were of a normal thickness.

Noninvasive Risk Assessment for Stroke: Special Emphasis on Carotid Atherosclerosis, Sex-Related Differences, and the Development of an Effective Screening Strategy

Carotid sonography, which can be safely performed on nearly all patients without risk of complications, has replaced angiography as the diagnostic method of choice in many institutions

Screening for carotid artery stenosis can be a lucrative business using portable equipment and mobile vans. While this fatty buildup of plaque in the arteries of the neck is one risk factor for ischemic stroke, current evidence does not suggest that performing carotid dopplers to screen for CAS reduces the incidence of stroke or provide long-term benefits. After a positive screening, the follow-up procedures can lead to heart attacks, bleeding, strokes, and even death.

Recommendations for Management of Patients with Carotid Stenosis

Carotid ultrasound provides reliable assessment of the carotid bifurcation with high sensitivity and specificity. It is fast, inexpensive, and widely available.

To Check or Not to Check? Carotid Screening Should be Limited to Highly Selected Patients, Say Experts

The USPSTF has previously stated that more than 4,000 patients would need to be screened to prevent 1 stroke.

There is a new industry offering preventive health screening services direct to the public. A few years ago it was common to see ads for whole body CT scan screening at free-standing CT centers. That fad sort of faded away after numerous organizations pointed out that there was considerable radiation involved and the dangers outweighed any potential benefits. Now what I most commonly see are ads for ultrasound screening. In fact, I am sick and tired of finding them in my mailbox and between the pages of my local newspaper. Ultrasound is certainly safe, with no radiation exposure. It sounds like it might be a good idea, but it isn’t.

In this Point-Counterpoint Dr. Zierler and Dr. Berland provide their views on this controversial issue.

Cardiovascular Ultrasound aims to provide a suitable platform for the most current, clinically and biologically relevant, and high quality research in the field of ultrasound of the heart and vessels.

Our mission is to provide community-level access to preventive healthcare with easy-to-understand test results to share with your doctor. Based on your risk factors such as family history, age, or pre-existing health conditions, we will help you identify medical screenings right for you.

Carotid ultrasound has no risks because the test uses harmless sound waves. They are the same type of sound waves that doctors use to create and record pictures of a baby inside a pregnant woman.

Sonography is a useful way of evaluating the body's circulatory system. Vascular ultrasound is performed to: •help monitor the blood flow to organs and tissues throughout the body. •locate and identify blockages (stenosis) and abnormalities like plaque or emboli and help plan for their effective treatment...