Where in health am I? : Home / Health Cloud / Challenges / Inflammation 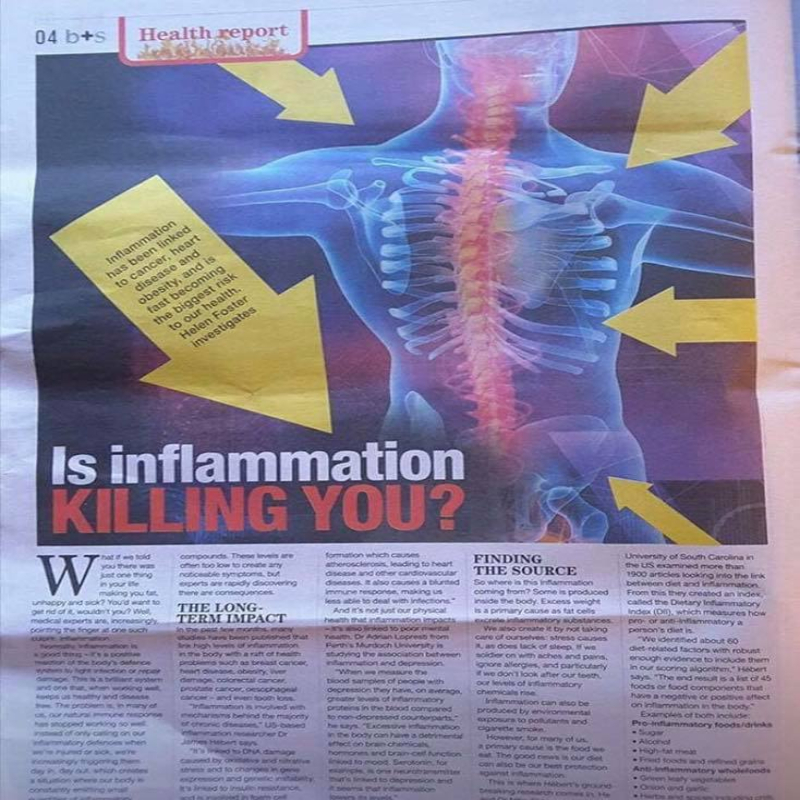 For centuries, scientists have debated whether inflammation is good or bad for us. Now we believe that it’s both: too little, and microbes fester and spread in the body, or wounds fail to heal; too much, and nearby healthy tissue can be degraded or destroyed. The fire of inflammation must be tightly controlled—turned on at the right moment and, just as critically, turned off.

Lately, however, several lines of research have revealed that low-level inflammation can simmer quietly in the body, in the absence of overt trauma or infection, with profound implications for our health. Using advanced technologies, scientists have discovered…

The end of inflammation? New approach could treat dozens of diseases.

Cancer, aging, and severe COVID-19 have all been linked to damage from inflammation. Now scientists are flipping their focus to find new drugs that may revolutionize treatments.

As we age, the immune system begins to shift into a heightened state of alert, dialing up inflammation and running out of certain immune cells.

Inflammation: the key factor that explains vulnerability to severe COVID

While many factors contribute to how severely people are affected, including access to healthcare, occupational exposure and environmental risks such as pollution, it’s becoming clear that for some of these at-risk groups, it’s the response of their immune system – inflammation – that explains why they get so sick.

Steroids are a powerful Covid-19 treatment. We need to learn to use them better.

Doctors must optimize treatments for deadly inflammation in Covid-19 patients to save more lives.

Body-wide inflammation is tied to most chronic diseases, limiting people’s health and longevity.

The Fundamental Link Between Body Weight and the Immune System

Inflammation plays a critical role in determining how we digest food, and it’s only now starting to reveal itself.

Signs of inflammation are like a car's dashboard engine light. It tells you that something is wrong. But your response is not to take out the bulb, because that's not the problem. Instead, you look at what caused the light to turn on. "It's the same with inflammation," says Dr. Shmerling. "It's telling you that something bigger is going on that requires attention."

The Enemy Inside You

It's the most important health problem you've never heard of—one that can simmer in your body for decades.

Anti-Inflammatory Diet: What Is It And How Can It Help Everyone?

“In a nutshell, anti-inflammatory eating is about eating whole, unprocessed foods,” McLeod told HuffPost Australia. “It’s about eating a more plant-based diet, rather than eating lots of meat and processed foods. It’s about including healthy fats, herbs and spices, and also taking time and effort to prepare your food in a healthy way.”

Explainer: what is inflammation and how does it cause disease?

So inflammation is one of our most ancient forms of defence and it works rapidly and efficiently to protect us in many situations. What can go wrong? The failure to turn off inflammation in chronic disease has dire, painful and debilitating consequences, as patients with rheumatoid arthritis or inflammatory bowel disease will readily agree.

How to extinguish the inflammation epidemic

Stress, obesity and poor diet trigger persistent inflammation, which can lead to heart disease and depression. We’re finally working out how to fight it.

Inflammation at the Root of Most Diseases

Inflammation has been found to be associated with just about every health condition and researchers are furiously investigating chronic inflammation’s effects on health and possible preventive medical applications. It’s “an emerging field,” says UCLA’s Dr. David Heber. “It’s a new concept for medicine.”

We need to get our priorities straight. Forget inflammation and pay attention to what matters: eat healthy, eat little and exercise if you want to reduce the chance of suffering from the many diseases associated with bad diet.

Inside the Inflammation Factory

A newly discovered structure in cells underlies inflammation wherever it occurs—an insight that may lead to new treatments for ailments as diverse as atherosclerosis, Alzheimer's and fatty liver disease.

Is Inflammation Bad For You Or Good For You?

Acute inflammation occurs when you sprain your ankle or get a paper cut. It's part of the immune system's box of tricks to spark a defense and promote healing. But when that response is constantly triggered, over time it can damage the body instead of healing it. That's what happens in autoimmune diseases like rheumatoid arthritis.

Is Inflammation What's Causing Your Depression?

Scientists have hit on a theory about inflammation that could radically change the way we treat people with pain and depression symptoms. One doctor isn't waiting for proof.

Tantalizing clues point to inflammation’s role in an array of diseases. But will treatments follow?

Inflammation has become one of the hottest buzzwords in medical science, pointed to as a culprit in causing or aggravating conditions ranging from allergy to autism to Alzheimer’s disease. But it’s far from clear that standard anti-inflammatory drugs, which have been around for decades, will help patients with those conditions, especially since they often come with dangerous side effects. So in labs across the country, scientists are trying to puzzle through the basic biology, understanding how inflammation leads to disease — and whether it’s possible to develop drugs that could interrupt that process.

The dramatic rise in depression diagnoses over the last two decades is a great challenge to modern medicine...The reasons for the increase are complex, but one important theory deserves special consideration, because I believe it offers new possibilities for prevention and treatment. At the center of this theory are cytokines — proteins made by immune cells that govern responses to foreign antigens and germs.

What do heart disease, diabetes, Alzheimer's, stroke and cancer have in common? Scientists have linked each of these to a condition known as chronic inflammation, and they are studying how high-fat foods and excess body weight may increase the risk for fatal disorders.

The debate over the latest cure-all craze.