Epidural steroid injections are the most widely used pain management procedures in the world. So why all the criticism? Paul Lynch MD 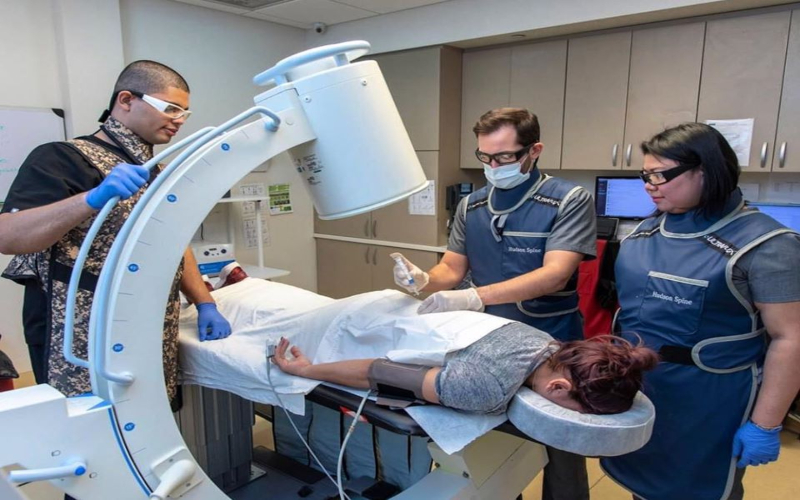 Epidural steroid injections have become one of the most commonly used pain treatments in modern medicine. In the U.S., we perform an estimated 10-11 million of these procedures each year, with about 20 percent of those coming in the more elderly Medicare population. In fact, I would say that this very procedure is what helped launched the specialty of pain management, also referred to as pain medicine, some 30+ years ago.

You see, anesthesiologists are trained on how to position special needles within the epidural space of the spinal canal in order to anesthetize the body for surgery or to treat labor pain. There is a special technique required to perform epidural blocks appropriately,…

After Doctors Cut Their Opioids, Patients Turn to a Risky Treatment for Back Pain

An injectable drug that the manufacturer says is too dangerous to use along the spine is growing in popularity for back pain as doctors turn away from opioids. The anti-inflammatory drug, called Depo-Medrol and made by Pfizer, is approved for injection into muscles and joints. Once a drug is approved, however, doctors may legally prescribe it however they see fit. And doctors have long given Depo-Medrol shots, or the generic equivalent, close to the spinal cord for painful backs, necks and conditions like spinal stenosis.

Epidural steroid injections (ESIs) are one of the most common procedures done for pain that originates in the lumbar (low back) or cervical (neck) spine, sometimes in the thoracic (mid back).

Ever Have A Bad Epidural?

I’ll try an make this as short as I can. I was receiving a lumbar epidural steroid injection. I’ve had three different kinds of pain shots over the years – so I know what to expect. This though went terribly wrong IMO.

Epidural steroid injections are the most widely used pain management procedures in the world. So why all the criticism? Some would lead you to believe it is the most foolishly used procedure in the world. The truth, as it so often does, lies somewhere closer to the middle.

Epidural steroid injections are promoted as a less invasive alternative to back surgery, but there are potential problems when doctors work so close to your spinal cord, even if they’re using needles instead of knives.

Before a Wave of Meningitis, Shots Were Tied to Risks

The increased use is driven by the aging of the population, the desperation of patients and the desire of physicians to help — and there are financial incentives. The serious complications, while extremely rare, are more noticeable because of the explosive growth in the number of injections.

Unlike an epidural steroid injection, exercise is a part of nearly every sciatica treatment plan. Exercise can help minimize your pain by strengthening the muscles that support your lumbar spine, and by spurring the release of healing oxygen and nutrients to the area.

The question is, Why? Why would pain clinics around the country rely on a pharmacy that mixes its own brand of unapproved drugs, especially for a delicate procedure like an epidural injection that has the potential — realized in these awful cases — to infect a patient’s nervous system?

The Truth About Steroid Shots for Back Pain

When Do Epidural Steroid Injections Work for Back Pain?

There is no conclusive evidence that epidural steroid injections work better for one condition than another; success rates are different for each individual. For those hoping to postpone surgery, injections may provide enough temporary relief.

Worth a shot, or should you skip it?

Our analysis of the evidence, based on a recent report by the American Society of Health-System Pharmacists and several published reviews and treatment guidelines, suggests that while the shots might have limited value by providing short-term relief to some people, in most cases people should try other measures first.

In fact, I would say that this very procedure is what helped launched the specialty of pain management, also referred to as pain medicine, some 30+ years ago.

5 Reasons Why You Should Avoid Epidural Injections In Your Spine

Whether your doctor has recommended this for you or someone you love have a look at my top 5 reasons why this bit of advise is just downright terrible...

Some patients with neck and back pain report that their doctor requires them to get epidural steroid injections (ESI's) before they are prescribed opioid pain medication. Many do not realize that the procedure or any use of drugs for spinal injection is not FDA approved and is considered "off label." Some patients benefit from ESI’s, while others gain no pain relief or suffer serious complications.