The dark side of acetaminophen - Jennifer Yang 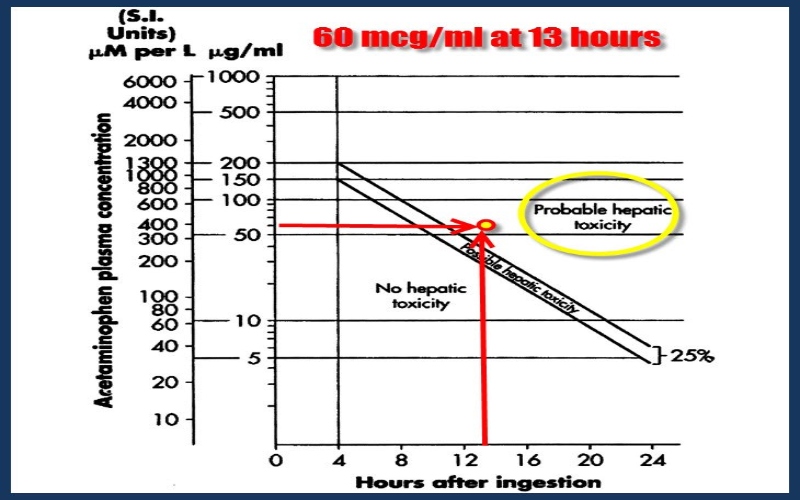 The first acetaminophen level should be drawn at 4 hours post-ingestion, as levels done before this are uninterpretable because absorption and distribution of the drug may not be complete. If the patient presents greater than 24 hours post-ingestion, the level could be zero despite toxicity so liver function tests should be drawn. If a decision is made to admit and treat the patient then a CBC, PT, PTT, BUN, Creatinine, electrolytes, bilirubin, and transaminases should be drawn and repeated every 24 hours until discharge.

To interpret the serum acetaminophen level, the time of ingestion must be established as accurately as possible and the level plotted on the Rumack-Matthew normogram.…

Use the Acetadote dosage calculator to calculate the accurate dose of Acetadote for your patients.

Early administration of NAC (< 8 hours post-ingestion) is vital to decreasing the risk of hepatotoxicity; acetaminophen is a leading cause of drug-induced liver injury.

Acetaminophen can be fatal in overdose, but many people underestimate the potential dangers of this medication. The therapeutic dosage is 10 to 15 mg/kg per dose in children and 325 to 1,000 mg per dose in adults, with a maximum recommended daily dosage of 80 mg/kg in children or 4 g in adults. The toxic dose varies among individuals, but toxicity is unlikely to result from a single dose of <150 mg/kg in a child or 7.5 g to 10 g in an adult.

Acetaminophen (known as paracetamol outside the United States) is a commonly used analgesic and antipyretic agent, and its use is one of the most common causes of poisoning worldwide.

Guidelines for the Management of Acetaminophen Overdose

Included herein are flowcharts for managing both acute and chronic acetaminophen overdose, and a nomogram, which uses acetaminophen serum concentrations at various time intervals following a single, acute overdose to determine whether the antidote should be administered.

The dark side of acetaminophen

If it entered the market today, it probably would not be approved as an over-the-counter drug.

Millions of people take Tylenol weekly without incident, and experts say that the health benefits of the drug, when taken at the recommended dose, continue to outweigh the risks. But the question remains: Should more be done to prevent accidental overdoses of Tylenol and other acetaminophen-containing products, especially when these deaths and hospitalizations may be preventable?

N-acetylcysteine (NAC or Mucomyst) is the specific antidote for acetaminophen toxicity. NAC given before 8 hours post-ingestion eliminates mortality and brings morbidity to a few percent (the 8-hr window). Its efficacy diminishes beyond 8 hours, and diminished further beyond 16 hours post-ingestion. Failure to recognize and treat acetaminophen toxicity within 16 hours results in significant morbidity and mortality.

Acetaminophen is in more than 600 prescription and over-the-counter medicines. When used as directed it’s safe and effective, but taking too much can lead to liver damage. Do you know your dose?

Toxicity is typically divided into stages, but this may not work perfectly in every patient (especially in patients who ingested several doses of acetaminophen over time).

Acetaminophen toxicity is the second most common cause of liver transplantation worldwide and the most common in the US.