Where in health am I? : Home / Health Cloud / Challenges / Rare Conditions / Hunter Syndrome 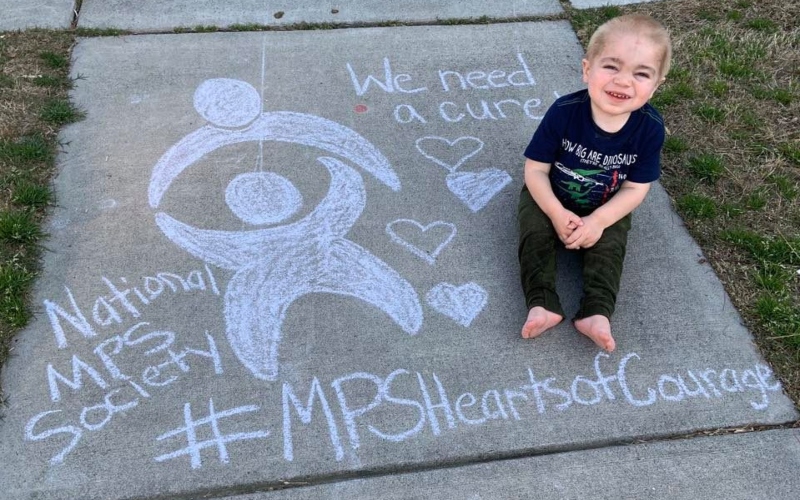 Think of it this way: when your garbage can gets full, you take out the trash. But what if you can’t? What if bag after bag fills up, taking over your kitchen? Soon, it would be hard to walk around, cook, or clean. As the trash builds even higher, your kitchen becomes unusable. Similarly, children with Mucopolysaccharidosis Type II (MPS II), also known as Hunter Syndrome, are unable to make the enzyme that takes care of our cellular garbage, their bodies becoming like the kitchen in this example.

HOW DO YOU RECOGNIZE HUNTER SYNDROME?

Hunter Syndrome is a rare genetic disease that is progressively debilitating, life-limiting and without a cure. It occurs…

Mucopolysaccharidosis type II (MPS II or Hunter's syndrome) is a rare X-linked recessive genetic disease caused by lack of the enzyme iduronate sulfatase, which leads to an accumulation of glycosaminoglycans (GAGs) throughout the body.

You really don’t know what to expect with this disease because it changes every child differently. All three of my children are differently affected by this disease.

Mucopolysaccharidosis type II (Hunter syndrome): a clinical review and recommendations for treatment in the era of enzyme replacement therapy

The World's Most Expensive Drugs

Think of it this way: when your garbage can gets full, you take out the trash. But what if you can’t?

Give kids with Hunter Syndrome the chance to grow up.

If you or someone you know has Hunter syndrome, one of the most important things you can do is learn about the disease.

Whether you suspect your son or someone you know has Hunter syndrome, have recently received a diagnosis, or are living with the condition, this website has been developed to provide information and resources to support you.

The National MPS Society exists to find cures, support and advocate for MPS and ML.

Mucopolysaccharidosis type II (MPS II), also known as Hunter syndrome, is a condition that affects many different parts of the body and occurs almost exclusively in males. Individuals with this disorder often have a large head (macrocephaly), a buildup of fluid in the brain (hydrocephalus), an enlarged liver and spleen (hepatosplenomegaly), and a soft out-pouching around the belly-button (umbilical hernia) or lower abdomen (inguinal hernia).

Mucopolysaccharidosis type II (MPS II) is a rare lysosomal inborn error of metabolism that affects every organ of the body. Although the age of onset, disease severity and the rate of progression of the disease vary significantly, initial symptoms and findings associated with MPS II usually become apparent in children from two to four years of age