There is no safe level of exposure and there is no dose of radiation so low that the risk of a malignancy is zero — Dr. Karl Z. Morgan, dubbed the father of Health Physics 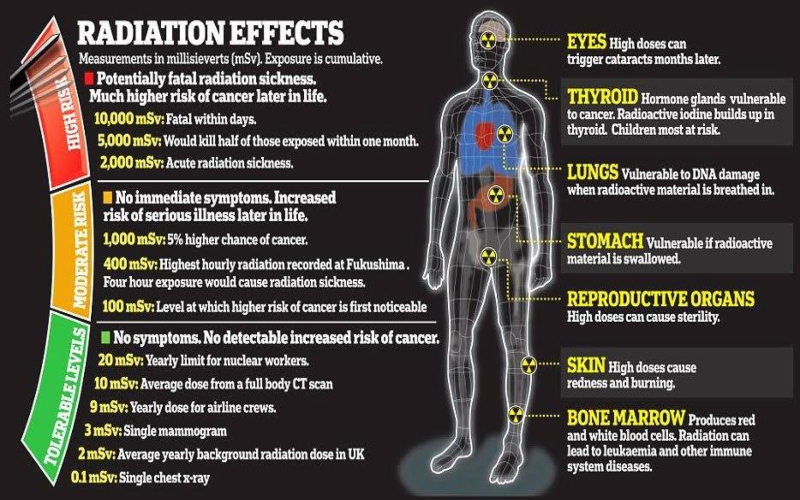 Why We Should Think Twice About Getting A CT Scan

People fear radiation for good reason. All ionizing radiation passes unimpeded through cells of the body, mutating or destroying DNA along the way. The danger level depends on the dose and the length of exposure. We're exposed to small amounts of radiation all the time -- from cosmic rays to the normal radioactive decay of soil, rocks and building materials. Even the granite in the U.S. Capitol Building emits low levels of radiation. These levels are harmless, but a high dose can kill, and prolonged or repeated moderate exposure can lead to cancer.

So why are we afraid of nuclear power, but not worried about the radiation in medical imaging tests, such as a CT scan? Here are a couple…

According to the National Council on Radiation Protection and Measurements (NCRP), the average yearly radiation dose per person in the U.S. is 620 mrem. Estimates are given in millirem (mrem). (The corresponding international unit for effective dose is the millisievert (mSv).)

We live in a radioactive world - humans always have. Radiation is part of our natural environment. We are exposed to radiation from materials in the earth itself, from naturally occurring radon in the air, from outer space, and from inside our own bodies (as a result of the food and water we consume). This radiation is measured in units called millisieverts (mSv). The average dose per person from all sources is about 6.20 mSv per year. It is not, however, uncommon for any of us to receive less or more than that in a given year (largely due to medical procedures we may undergo). International Standards allow exposure to as much as 50 mSv a year for those who work with and around radioactive material.

How Much Radiation Do You Get From a Mammogram?

How to protect yourself from nuclear radiation

Duck and cover? More like: Go inside and stay inside.

Researchers have developed a simple finger-prick test that scans a single drop of blood to rapidly determine whether the body has been exposed to toxic levels of radiation. Timing is key when it comes to assessing radiation dosage in members of an exposed population. Victims above a certain dose threshold require immediate and aggressive treatment, such as a blood transfusion or cytokine therapy.

That Lead Apron in the X-Ray Room? You May Not Need It

A number of radiology organizations are trying to end the decades-old practice of shielding patients from radiation with lead aprons.

Explainer: How much radiation is harmful to health?

Radiation is everywhere. We catch it from the sun’s rays in the sky, and from the rocks beneath our feet. It comes from television sets, radios and mobile phones. We absorb it from certain fruits, vegetables and nuts. But not all radiation is equal.

Imaging Studies - Our Children are Glowing

Children have ten times the risk for CT Scan caused cancer compared to adults. Ultrasounds and MRIs, whenever appropriate, should be substituted especially in the younger population.

A concerning new study links miscarriages to cellphone radiation. How worried should we be?

Non-ionizing radiation may have more of a biological effect than we thought.

Air travel exposes you to radiation – how much health risk comes with it?

You might guess that a frequent flyer’s radiation dose is coming from the airport security checkpoints, with their whole-body scanners and baggage x-ray machines, but you’d be wrong. The radiation doses to passengers from these security procedures are trivial. The major source of radiation exposure from air travel comes from the flight itself.

Airport Scanners: Trading One Hazard for Another?

One of the 'hottest' issues in worldwide air travel security is the use of the so-called full body scanners. So, are airport scanners safe or not?

Astronauts don't seem to be dying from exposure to space radiation

Space exploration is a risky business. As well as the physical dangers, radiation from the sun and cosmic rays is thought to put astronauts at a higher risk of cancer and heart disease in later life. But a new study that looked at whether astronauts are dying early from these conditions found no sign. “We haven’t ruled it out, but we looked for a signal and we didn’t see it,” says Robert Reynolds of Mortality Research & Consulting, City of Industry in California.

Do X-Rays Increase My Risk of Cancer?

The risks are real—but usually outweighed by the benefits.

Don’t Worry (Too Much) About Radiation From Flying

Even though you're being hit with cosmic radiation 64 times more potent than when you're on the ground, relax.

Drug Can Stop Radiation Poisoning Up To 24 Hours After Exposure

Even at low levels, radiation can make people sick over time. But brief periods of intense exposure, like after the destruction of the Fukushima reactor in 2011, can cause more immediate health threats, especially on the gastrointestinal tract, or even death. Now researchers have developed a drug that can stop damage to the intestines as long as it's administered up to 24 hours after a patient is exposed, according to a study published recently in the journal Laboratory Investigation.

Exactly What Happens When Your Body Is Exposed to Radiation

"Some frequent fliers would be surprised to learn that their exposure to radiation exceeds that of nuclear power workers," said the University of Surrey's Scott Cohen, who has studied the dark side of hypermobility. "And few would realize that frequent jet lag disrupts genes that influence aging and heightens the risk of having a heart attack."

FYI: How Does Nuclear Radiation Do Its Damage?

Or, why everyone is stocking up on iodine tablets.

If Radiation Exposure Kills People, Why Is It An Effective Cancer Treatment?

So, to paraphrase - If water drowns people, why is it essential for life? -or - If knives kill people, why are scalpels used in surgery? Because too much of anything can be dangerous, but the right amount can be life saving.

Imaging centers have proliferated in the past decade. You would think that the potential to develop cancer years or decades after an imaging procedure would ensure that imaging centers are as safe as possible. Think again!

Is a Little Radiation So Bad?

This chart puts the radiation from air travel in perspective. (Spoiler: It's minuscule.)

Every time I pass through an airport — which is pretty often — I worry about the radiation I'm exposed to at airport security and then on the plane. But in a recent look at the evidence about the health effects of frequent flying, I learned that there's probably no need to fret...

How dangerous are small doses of radiation?

On Fringe, Radioactivity is Real, But Cures are Junk Science

Could Emily's radiation contamination really have been contagious? Not likely. As we learned by debunking the science in the show's premiere, contagions are reserved to microbial or viral threats--biological agents that multiply or reproduce once inside the body. "However, a person may become internally contaminated when they swallow or breathe in radioactive materials, or when radioactive materials enter the body through an open wound or are absorbed through the skin,"

The Not-So-Clear But Present Danger

When a living cell is exposed to a large dose of ionizing radiation, the chemicals that sustain life are broken apart and the cell dies. As masses of cells die, the body's vital systems and organs -the brain, the central nervous system, the blood and the immune system - break down and the victim generally dies from a combination of organic failures. This is probably what happened to the Chernobyl victims who died.

Why We Should Think Twice About Getting A CT Scan

Radiation's harmful effects on the body are the same no matter the source, yet we see some kinds of radiation as bad and others as good. We request CT scans from doctors, but we'd have to be dragged kicking and screaming into the Fukushima evacuation zone.

Our objective is to share factual, easy-to-read information. Knowledge can reduce fear and anxiety about radiation.

If you are exposed to small amounts of radiation over a long time, it raises your risk of cancer. It can also cause mutations in your genes, which you could pass on to any children you have after the exposure. A lot of radiation over a short period, such as from a radiation emergency, can cause burns or radiation sickness. Symptoms of radiation sickness include nausea, weakness, hair loss, skin burns and reduced organ function. If the exposure is large enough, it can cause premature aging or even death. You may be able to take medicine to reduce the radioactive material in your body.

Radiation is all around, in the ground, at the doctors' office and even from the sun and stars. While large doses can be harmful, these smaller doses are part of everyday life.