Where in health am I? : Home / Health Cloud / Challenges / Pain / Chest Pain

Chest pain can actually happen due to a slew of causes, including quite a few that aren’t too hard to treat - Korin Miller 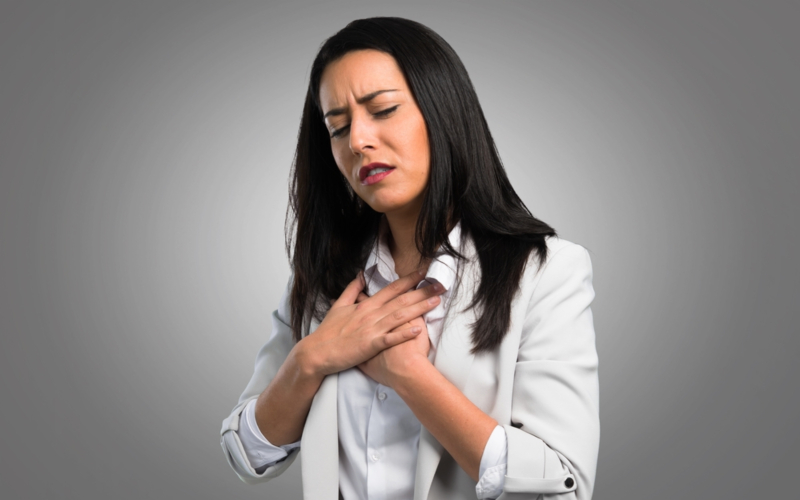 3 Myths About the Causes of Chest Pain

Remember the 1970’s television show Sanford and Son? Comedian Redd Foxx played a father who was known for clasping one hand on his heart, throwing the other in the air, and declaring the end whenever he had chest pain—which was pretty much every episode.

“When people have pain in their chest, we obviously are concerned about the heart because this generally requires more urgent care. We like to rule that out first,” says Neel Chokshi, MD, MBA, an assistant professor of clinical medicine at Penn Medicine. “But there are many, many other reasons to have pain in the…

Teaching Point #1: Uselessness of “Negative” Stress Tests. Many emergency providers have taken care of patients with true acute coronary syndrome or even primary cardiac arrest despite having had a recent “negative” stress test. I know I have.

Chest pain: A heart attack or something else?

When is chest pain serious? That dull burning feeling in your chest doesn't seem to be going away, and even feels like it is getting worse. Is it a heart attack, or something else? It's a vexing question, one that millions of people — and their doctors — face each year. What's the problem? Chest pain can stem from dozens of conditions besides heart attack, from pancreatitis to pneumonia or panic attack.

In a new study of 1.1 million people, a surprising 42 percent of women admitted to hospitals for heart attack never had chest pain. By comparison, just 30.7 percent of men who were admitted didn’t experience chest pain. Women were also more likely to die after a heart attack; the mortality rate for women in the study was nearly 15 percent, compared with 10 percent for men.

Chest pain has a variety of sources, and virtually any structure in the chest can cause pain. This includes the lungs, the ribs, the chest wall muscles, the diaphragm, and the joints between the ribs and breastbone. Injury, infection, or irritation to any of these tissues can be responsible for chest pain.

Heart attack and ovarian cancer no longer need to be such aggressive killers of women. You know yourself better than anyone else. When your body produces warning symptoms, listen to it!

'Stress is one of the great public health challenges of our time.'

Chest pain can make you wonder if you’re having a heart attack. It can also be one of the many common symptoms of acid reflux.

Chest Pain in Children and Teenagers

The most common cause of chest pain in children and teenagers is chest wall pain. “Chest wall” is a term for the structures that enclose and protect the lungs, including the ribs and sternum.

Chest Pain that Comes and Goes, Symptoms, Remedies, and Treatments

There are many causes of chest pain, and while many are not serious, it may be difficult to distinguish among heart attack, pulmonary embolus or aortic dissection, and another diagnosis that is not life-threatening. For that reason, patients are routinely advised to seek medical care for most types of chest pain.

Is It a Heart Attack -- or Indigestion? Helping the ER Doctors Get It Right

A significant percentage of chest-pain patients are suffering not from heart attack but from indigestion or acid reflux. Consequently, physicians often offer chest-pain patients a cocktail of gastro-intestinal medicines. Too often, though, the physician assumes that a subsequent decline in pain means the problem is gastro-intestinal, says Dr. Sullivan, who is also a lawyer and has studied medical errors in the ER.

My Panic Attack Was a Symptom of a Heart Condition

Women are treated less aggressively in their initial encounters at the hospital until they 'prove that they're as sick as male patients.'

What Causes Chest Pain When Feelings are Hurt?

Although the biological pathways underlying these connections between physical and mental pain are not well understood, studies such as these are revealing how intricate the connection is and how very real the pain of heartache can be.

Chest pain is one of the most common reasons Americans, aged 15 years and older, visit the emergency room (ER). In fact, the percentage of chest pain visits that are considered urgent is two to three times higher than the percentage of visits for abdominal pain and other symptoms. Although many of us associate chest pain with having a heart attack, there are indeed, a number of other possibilities for its cause. Let’s take a look at what some of them are.

A Closer Look at the HEART Score

Despite popularity, there are challenges with any HEART score approach...

3 Myths About the Causes of Chest Pain

Remember the 1970’s television show Sanford and Son? Comedian Redd Foxx played a father who was known for clasping one hand on his heart, throwing the other in the air, and declaring the end whenever he had chest pain—which was pretty much every episode. Many people think the same thing: Chest pain automatically means heart attack. But that’s not necessarily true.

10 steps before you refer for chest pain

Chest pain is a common presentation in general practice. Each year about 1% of the UK population visit their GP with chest pain. The average GP will see, on average, four new cases of angina each year. The Euro heart survey of newly diagnosed stable angina patients showed that the incidence of death and myocardial infarction (MI) was 2.3/100 patient-years. This is increased in patients with a previous MI, short history, more severe symptoms and with heart failure or other co-morbidities, such as diabetes.

The cause of chest pain in outpatients may vary from life-threatening conditions to those that are relatively harmless. The most common causes of chest pain are musculoskeletal (30-50%) and gastrointestinal conditions (10-20%).

It’s 2 AM and you wake up with chest pain, aka angina. What should you do? Maybe it’s just indigestion, but maybe it’s a heart attack. How do you know what to do?

The truth is, it's not easy to tell what's behind your chest pain and whether the cause is life-threatening or just a nuisance.

85% of hospital admissions for chest pain are NOT heart attack

Admitting people to hospital who don’t need to be admitted not only takes up valuable staffing and hospital resources that could be assigned to real heart patients in need, but also costs the health care system billions of dollars each year. As you can imagine, this is a real dilemma for the medical profession.

9 Causes of That Random Chest Pain

Chest pain can make it feel like your body has pressed a panic button, especially when it seemingly strikes out of nowhere. Here’s the good news: Chest pain can actually happen due to a slew of causes, including quite a few that aren’t too hard to treat. (Translation: Don’t just resign yourself to having a heart attack, because that’s absolutely not the only possibility here.)

You can probably recite the classic heart attack symptoms, i.e., chest pain radiating down the left arm, crushing sensation, shortness of breath, sweating. That's absolutely correct, if you're a man! Unfortunately, researchers have only recently discovered that women's heart attack symptoms are often very different from those classic symptoms that we've all heard about for years...

Many problems can cause symptoms in the chest area, such as discomfort, shortness of breath or pain with swallowing.

Chest pain comes in many varieties, ranging from a sharp stab to a dull ache. Some types of chest pain can be described as crushing or burning. In certain cases, the pain travels up the neck, pierces through to the back or radiates down one or both arms. Many different types of problems can cause chest pain. The most life-threatening ones involve the heart or lungs. Because it can be difficult to determine what exactly is causing chest pain, it's best to seek immediate medical help.

Although chest pain can be a symptom of many different conditions, it should always be taken seriously because it could be a sign of a heart attack.

Cardiac disease accounts for only 8-18% of all cases of chest pain and the majority of chest pain seen in primary care is due to more benign conditions, eg gastro-oesophageal reflux disease (GORD), muscle sprains, panic disorder or shingles. -GORD is the most common cause of non-cardiac chest pain. One study found that 8% of those diagnosed clinically within primary care had a diagnosis of ischaemic heart disease, 83% were excluded as cardiac-based and in 9% there was diagnostic uncertainty. About 17% were referred for further assessment.

Chest pain generally originates from one of the organs in the chest (heart, lung, or esophagus) or from the components of the chest wall (skin, muscle or bone). Occasionally, organs close to the chest, such as the gall bladder or stomach, may cause chest pain. Pain in the chest may also be the result of neck pain that is referred to the chest, called referred pain.