Where in health am I? : Home / Health Cloud / StaynHealthy / Environmental Health / Bites

Do not bite at the bait of pleasure, till you know there is no hook beneath it - Thomas Jefferson 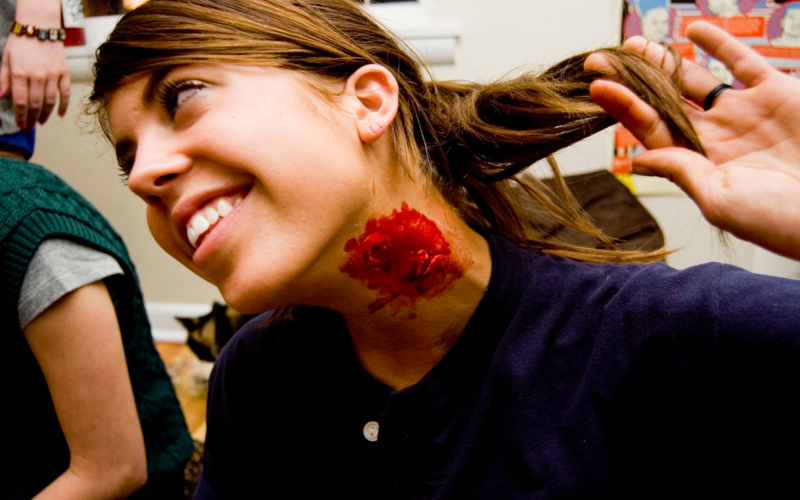 While you may be relishing your time outdoors in the glorious summer, dining al fresco with the family on the patio, picnicking on the beach or just nabbing a burger or a hot dog at a curbside stand, some familiar, pesky critters at the same time may be munching on you.

Bug bites, merely annoying for most of us, can be medically perilous to some who encounter the wrong creepy crawler or experience a severe allergic reaction. When those bites go beyond a bothersome itch, it’s important to know what to look for, how your body may react and if this might be the time to see your doctor...

Mosquitoes: While most mosquito bites are little more than a bother, the…

Accidental therapists: For insect detectives, the trickiest cases involve the bugs that aren’t really there

For someone terrorized by insects, an entomologist’s office is at once the best and worst place to go for help. The best, because those labs are uniquely equipped to identify what bugs you; the worst, because they can seem like an entomophobic’s personalized circle of hell.

The world’s deadliest animal doesn’t have fangs or bone-crushing coils. It doesn’t even have teeth. But it can inject parasites and viruses straight into your bloodstream. What is this killing machine? None other than the humble mosquito.

So you’ve been bitten by a leech. What’s the worst that could happen?

Most leech encounters play out similarly. Finding one of these bloodthirsty worms on your body can be a disturbing experience, but it’s usually not a medical emergency. Usually. Every once in awhile, leeches can cause some serious and gruesome complications. Here’s what can happen when one of these little suckers bites you, and what you can do about it.

Worldwide, the animal responsible for by far the greatest number of human deaths is just such an insect that transmits a deadly infection: the mosquito. Yet among nonhuman animals, the creatures that cause more American deaths than any other are bees and wasps.

Arthropod bites are often hard to diagnose without an examination or a good description of the bite(s), information about how and when the bites occurred, and (ideally) a specimen of the suspected pest. Although many biting arthropods leave clues that help with diagnosis (such as the pattern and types of lesions), it is often very difficult to determine the cause of a bite with certainty without a specimen or observation of the bite or sting taking place.

Five diseases you can catch from pets

Some argue for bites and scratches to be included as a zoonosis. If we do include them, they are likely to be among the most common zoonoses. Never nice, always painful, and in disturbing, rare cases – usually involving children – they can be fatal. Cat bites and scratches can transmit a bacterium called Bartonella henselae, the cause of “cat-scratch disease”. Both bites and scratch wounds can become badly infected causing further pain. Scars, both mental and physical, can be lifelong in those that have been attacked. Children and those exposed occupationally, such as postmen, are perhaps most at risk.

Rabies – a global killer that dog jabs can eliminate

About 20% of bite victims develop rabies, but the probability gets higher the worse the bite, for example from deeper and/or multiple wounds, and the closer it is to the brain and central nervous system. A bite leads to distressing and unnerving symptoms: initial pain and stiffness starts at the site of the wound, followed by fever, delirium, aggression, strange and uncontrollable vocalisations and inevitable and rapid progression to death. It is no coincidence that your classic scary movie (think zombies, werewolves, vampires) shares more than a passing resemblance to rabies.

The bite that's worse than any bark

We are all spot-on when we think that a dog bite can be nasty. But what most of us don't know is that a human bite can be even nastier, especially if you get bitten on the hand.

It invariably happens to almost everyone. An overzealous toddler bites a friend. A scared dog bites an intrusive child. A curious boy catches a mouse and gets bitten. Many parents are naturally worried when this happens. Is my child going to catch rabies or some other strange disease? How do I keep the bite from getting infected? Should I go to the ER or page my doctor urgently?

While you may be relishing your time outdoors in the glorious summer, dining al fresco with the family on the patio, picnicking on the beach or just nabbing a burger or a hot dog at a curbside stand, some familiar, pesky critters at the same time may be munching on you. Bug bites, merely annoying for most of us, can be medically perilous to some who encounter the wrong creepy crawler or experience a severe allergic reaction.

Summary of antibiotics for human, cat and dog bites.

Animal bites are preventable injuries. Preventing them is a task for society as a whole: appropriate rules for animal care must be in effect, animal owners must have the necessary social competence, and children must learn how to behave around animals.

Human and animal bites are the most common hand injuries, and most animal bites are from dogs or cats. A number of factors, including characteristics of the bite, age of the victim, bodily location of injury, time to presentation, severity of wound, and virulence of any inciting bacterium, must be considered when deciding on a treatment strategy.

Research has revealed that more than 60 percent of emerging infectious diseases are zoonotic, and that bats are not exceptional among wildlife as potential sources of human disease.

Getting rid of bedbugs is notoriously difficult, but sometimes people aren’t even sure if they have the critters in the first place...

Most bee stings can be treated without medical attention. First aid for someone who has been stung by a bee or wasp includes a number of dos and don'ts.

Certain species of insects appear to feast upon humans more than others. These pests include mosquitoes, no-see-ums, bedbugs, lice and scabies. Bugs bite for different reasons, including for nutritional value and to support reproduction.

A small bite on the hand from Fluffy or Fido is often laughed off, especially if it’s done by a family pet. However, even the slightest pinprick bite-related injury can potentially be life-threatening to victims...

Will reading...dog-bite-related articles guarantee that you and your loved ones are never bitten? Will it guarantee that your dog never bites? Of course not. But armed with the when, where, who and why of dog bites, you can take steps to avoid or minimize these possibilities...

Thousands of envenomations occur each year in the United States involving snakes, spiders, scorpions and marine life. Consequently, many patients present for evaluation and treatment of confirmed or suspected envenomations. A clinician's careful assessment of the history, signs and symptoms is important in guiding therapy and avoiding misdiagnosis.

Most cases of human bites involve children or drunk people...One case study of 92 bitten people found that 86 percent of cases involved alcohol (and 92 percent of bitees—the actual technical name!—were men). But these injuries are no laughing matter, as bite wounds can be very serious, even deadly.

The stingers and biters...

Forget all the heroics you've seen in the movies - and forget those snakebite kits you find in sporting goods stores. If a bite happens, the best thing to do is simply get safely to the emergency room.

If the thought of spiders makes your skin crawl, you might find it reassuring that the chances of being bitten by a spider are smaller than you imagine, recent research shows.

It's summertime, which means outdoor play, hiking, gardening — and tick bites. The creepy crawlies tend to latch on during the summer months...

Many different types of animals ranging from dogs, cats, hamsters, raccoons, ferrets, and squirrels can bite adults and children. Many times, bites are from the family pet. Most states require that animal bites be reported, therefore, the person bitten will be asked to fill out a form with information about the bite or asked specific questions for reporting purposes when medical care is sought.

Being bitten is a common cause of injury. Any animal can bite, including pets, wild animals and humans. The most common types of animal bites are dog and cat bites. Human bites are also very common.

Many insects, spiders, reptiles, and other animals can bite or sting humans. A person's reaction to bites and stings depends on the type and amount of venom (if any) injected into the bite, whether the person is allergic to the venom, and whether the biting animal was carrying a disease-causing agent.

Wild animals usually avoid people. They might attack, however, if they feel threatened, are sick, or are protecting their young or territory. Attacks by pets are more common. Animal bites rarely are life-threatening, but if they become infected, you can develop serious medical problems.

Most animals are capable of biting, but dog bites tend to be the most common animal bite, followed by cat bites. A short course of antibiotics may be prescribed for large or deep wounds, to prevent infection. Antibiotics are also used when a person has a weakened immune system – for example, as a result of a health condition such as HIV and AIDS, or from receiving certain treatments such as chemotherapy.

Animal bites pose a major public health problem in children and adults worldwide. The health impacts of animal bites are dependent on the type and health of the animal species, the size and health of the bitten person, and accessibility to appropriate health care. Numerous animal species have the potential to bite humans; however the most important are those arising from snakes, dogs, cats and monkeys.

Human and animal bites are relatively common and can result in minor injuries such as puncture wounds, scrapes, cuts or bruising. They most commonly occur to the face, hands, arms and legs. The primary concern for these bites is infection, which can usually be avoided with proper cleaning and treatment.