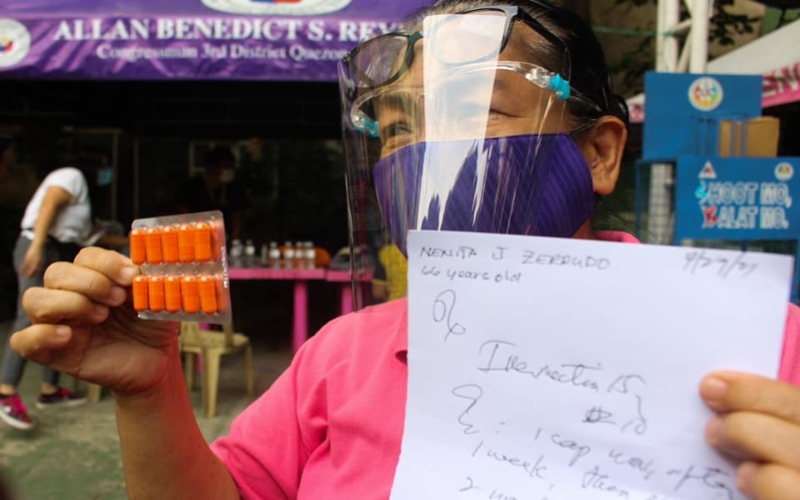 image by: The Manila Times

Doctors fighting COVID-19 should be supported by their profession and their government, not suppressed. Yet today physicians are smothered under a wave of censorship. With coronavirus variants and vaccine hesitancy threatening a prolonged pandemic, the National Institutes of Health and the broader U.S. medical establishment should free doctors to treat this terrible disease with effective medicines.

For centuries, doctors have addressed emerging health threats by prescribing existing drugs for new uses, observing the results, and communicating to their peers and the public what seems to work. In a pandemic, precious time and lives can be lost by an insistence on excessive data and review. But in the current crisis, many in positions of authority have done just that, stubbornly refusing to allow any repurposed treatments. This departure from traditional medical practice risks catastrophe. When doctors on the front lines try to bring awareness of and use such medicines, they get silenced.

I’ve experienced such censorship firsthand. Early in the pandemic, my research led me to testify in the Senate that corticosteroids were life-saving against COVID-19, when all national and international health care agencies recommended against them. My recommendations were criticized, ignored and resisted such that I felt forced to resign my faculty position. Only later did a large study from Oxford University find they were indeed life-saving. Overnight, they became the standard of care worldwide. More recently, we identified through dozens of trials that the drug ivermectin leads to large reductions in transmission, mortality, and time to clinical recovery. After testifying to this fact in a second Senate appearance — the video of which was removed by YouTube after garnering over 8 million views — I was forced to leave another position.

I was delighted when our paper on ivermectin passed a rigorous peer review and was accepted by Frontiers in Pharmacology. The abstract was viewed over 102,000 times by people hungry for answers. Six weeks later, the journal suddenly rejected the paper, based on an unnamed “external expert” who stated that “our conclusions were unsupported,” contradicting the four senior, expert peer reviewers who had earlier accepted them. I can’t help but interpret this in context as censorship.

The science shows that ivermectin works. Over 40 randomized trials and observational studies from around the world attest to its efficacy against the novel coronavirus. Meta-analyses by four separate research groups, including ours, found an average reduction in mortality of between 68%-75%. And 10 of 13 randomized controlled trials found statistically significant reductions in time to viral clearance, an effect not associated with any other COVID-19 therapeutic. Furthermore, ivermectin has an unparalleled safety record and low cost, which should negate any fears or resistance to immediate adoption.

Our manuscript conclusions were further supported by the British Ivermectin Recommendation Development (BIRD) Panel. Following the World Health Organization Handbook of Guideline Development, it voted to strongly recommend the use of ivermectin in the treatment and prevention of COVID-19, and opined that further placebo controlled trials are unlikely to be ethical.

Even prior to the BIRD Panel recommendations, many countries have approved the use of ivermectin in COVID-19 or formally incorporated it into national treatment guidelines. Several have gone further and initiated large-scale importation and distribution efforts. In the last month alone, such European Union members as Bulgaria and Slovakia have approved its use nationwide. India, Egypt, Peru, Zimbabwe, and Bolivia are distributing it in many regions and observing rapid decreases in excess deaths. Increasing numbers of regional health authorities have advocated for or adopted it across Japan, Mexico, Brazil, Argentina, and South Africa. And it is now the standard of care in Mexico City, one of the world’s largest cities.

It’s time to stop the foot-dragging. People are dying. The responsible physicians of this country, and their patients, need to be able to rely on their government institutions to quickly identify effective treatments, rather than waiting for pristine, massive Phase III trials before acting. At minimum, the NIH should immediately recommend ivermectin for treating and preventing COVID-19, and then work with professional associations, institutions, and the media to publicize its use. If it doesn’t, the organization will lose credibility as a public institution charged with acting in the national interest — and doctors will ignore its guidance in the future.

My story is not unique. Physicians across the country are fighting a pernicious campaign to denigrate all potential treatments not first championed by the authorities, and others have faced retaliation for speaking up. Sadly, too many of our institutions are using the pandemic as a pretext to centralize control over the practice of medicine, persecuting and canceling doctors who follow their clinical judgment and expertise.

Actually “following the science” means listening to practitioners and considering the entirety and diversity of clinical studies. That’s exactly what my colleagues and I have done. We won’t be cowed. We will speak up for our patients and do what’s right.

The I-MASS protocol has been developed for Mass Distribution during regional outbreaks or in resource poor countries to lessen the impact and spread of COVID-19.

We regard ivermectin as a core medication in the prevention and treatment of COVID-19. Ivermectin is a well-known, FDA-approved anti-parasite drug that has been used successfully for more than four decades to treat onchocerciasis “river blindness” and other parasitic diseases. It is one of the safest drugs known. It is on the WHO’s list of essential medicines, has been given 3.7 billion times around the globe, and has won the Nobel prize for its global and historic impacts in eradicating endemic parasitic infections in many parts of the world.

Ivermectin As a COVID-19 Therapy

So let me finish up by saying that my mind is not yet made up about ivermectin. I can be convinced by good data; if I couldn’t be, I shouldn’t be doing my day job at all. But I am not too optimistic – the data so far are consistent with a lot of other sorta-kinda-maybe-maybe not things I’ve seen over the years, where if you climb up on the right chair and hold your hand up to your face to block out the exact right stuff then things might look OK, but otherwise not so much.

How to Get Ivermectin

We understand and empathize with the challenges faced in obtaining a prescription for ivermectin during this time period prior to its use being formally adopted in national or international COVID-19 treatment guidelines. However, we are anticipating these treatment guidelines to be updated in the near future.

Ivermectin and Covid-19: how a cheap antiparasitic became political

The common antiparasitic ivermectin is being touted as a miracle cure for Covid-19 by doctors and campaigners the world over. Demand for approval of the drug is growing globally – with some countries recommending ivermectin as a treatment for coronavirus patients – despite leading health authorities consistently warning against its use.

Based on the totality of the clinical and epidemiologic evidence presented in this review, and in the context of a worsening pandemic in parts of the globe where ivermectin is not widely used, the authors believe the recommendation must be immediately updated to support and guide the nation’s health care providers.

The Drug that Cracked COVID

Kory sometimes despairs at the forces against him. “Our little Ivermectin has so many big enemies,” he says. “It’s David versus ten Goliaths.” But word is getting out. More than twenty countries representing some 20 percent of the Earth’s population use Ivermectin, many in their national protocol. Every day it seems Kory hears from someone like the Toronto doctor, a Bulgarian, who used Kory’s data to convince the health ministers in his home country to sign on. Kory talks every day to his growing base of 17,000 Twitter followers, and his peer-reviewed paper on Ivermectin recently exploded online as one of the most-discussed scholarly papers ever posted out of seventeen million tracked by Altmetric.

The BIRD Recommendation on the Use of Ivermectin for Covid-19: Executive Summary

The British Ivermectin Recommendation Development panel recommends ivermectin for the prevention and treatment of covid-19 to reduce morbidity and mortality associated with covid-19 infection and to prevent covid19 infection among those at higher risk.

The official Covid-19 treatment protocol in India continues to encourage the use of treatments that many scientists across the world have written off.

Ivermectin against COVID-19: The unprecedented consequences in Latin America

In Brazil and in most of Latin American (LATAM) and Caribbean countries, IVM has been prescribed and widely used for the preventive treatment of the severe acute respiratory syndrome coronavirus (SARS-CoV-2) immediately after the publication of its in vitro effect against the virus

Ivermectin is still not a miracle cure for COVID-19, despite what you may have read

Ivermectin is a hugely useful medicine in treating parasitic illnesses such as lice, worms and scabies, particularly in developing countries. But as we have already seen in the case of the malaria drug hydroxychloroquine, just because a medicine is useful for one purpose, it cannot automatically be considered a miracle cure for COVID-19.

Ivermectin: why a potential COVID treatment isn’t recommended for use

The antiparasitic drug was thought to be a potential treatment for COVID-19, but there isn't sufficient evidence to recommend its use, despite widespread support online.

Ivermectin, a drug typically used to treat parasitic worms, has been prescribed widely during the coronavirus pandemic, but rigorous data has been lacking.

Some doctors think they’ve found a cheap, generic drug which treats COVID-19. So why hasn’t anyone heard of it?

She started posting about ivermectin in one of her doctors’ Facebook groups — one for physicians who are also moms. Expecting to be met with the same sense of experimentation she saw in earlier months, the response she got was jarring. “When I try to talk to doctors about ivermectin, it feels like someone has poisoned them against it before I even say my first word,” Lieberman said. “The level of response is: You’re suggesting eye of newt. Why don’t we try some mugwort? Why don’t we try some fairy dust?”

Neither drug is approved in the US for COVID-19. And the FDA and WHO recommend against using them to prevent or treat COVID-19.

What is ivermectin, and should we be using it to treat Covid-19?

World-leading parasite researcher Dr Carlos Chaccour says using the drug in fight against the virus could be ‘very, very harmful’ “What people need to know is that ivermectin has not been established as a treatment for Covid,” he said. “Now that doesn’t mean it won’t work, but my feeling from looking at the various studies done so far is it probably isn’t going to work. But we do need to show that through clinical trials. We do need to know that for sure. So it’s worth testing.”

Censorship Kills: The Shunning of a COVID Therapeutic

Our manuscript conclusions were further supported by the British Ivermectin Recommendation Development (BIRD) Panel. Following the World Health Organization Handbook of Guideline Development, it voted to strongly recommend the use of ivermectin in the treatment and prevention of COVID-19, and opined that further placebo controlled trials are unlikely to be ethical.

We regard ivermectin as a core medication in the prevention and treatment of COVID-19.