Where in health am I? : Home / Blogs and Commentaries / Celebrity Health / Exercise is Medicine - Ask Alanis Morissette

Everyone has felt depressed at some point in their lives; whether you suffer from sporadic bouts of moodiness or full-blown depression the question is always - how do you pick yourself up when you're feeling down? 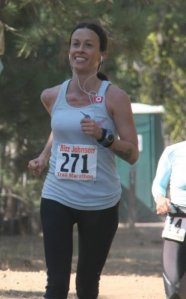 Singer and former child actress Alanis Morissette, 35, has struggled with depression her entire life. Recently, she found a non-pharmacologic, natural, anti-depressant: running! Alanis Morissette is probably best known for the soul-baring revenge song “You Ought to Know” from the 1995 album “Jagged Little Pill”, which to this day is still the best-selling debut album by a female artist.  At the time she seemed to be unstoppable, four Grammy awards and 30 million albums sold worldwide.

However, Morissette had a long history of depression, bouts with anorexia and bulimia, public breakups and pressure to produce another smash album which culminated in a major depressive episode and a two year hiatus.  In 2007, she found herself at an all time low after her breakup with fiancé Ryan Reynolds (Mr. Scarlett Johansson). She turned to food to get over the breakup, piling on more weight than ever and worsening her depression symptoms.

In 2009, she decided to make some serious changes in her life.  She adopted a vegan diet, started working out, and as a result she lost more than 20 pounds.  She also claims she no longer suffers from depression. In an interview with Runner's World, Morissette says that "running has made being depressed impossible. If I'm going through something emotional I just go outside for a run, and you can rest assured I'll come back with clarity".

Although she says she sometimes struggles to find the motivation to get up and run, she forces herself to “tie my laces, put on a tight bra and get out there like a little robot. The first 10 minutes are excruciating, but soon I get into the flow." She has since run two marathons for charity and says her healthy lifestyle has brought her “back to what I was born to be, at my best. … I feel very alive. … I have no more aches and pains".

Many scientists and doctors are now advocating two things for depression: sunlight and exercise. And a growing body of medical literature is showing that aerobic exercise is effective at minimizing depression symptoms. In addition to the well-known "runner's high," an endorphin surge that provides a temporary mood lift following a workout, the studies show that there is long term depression relief as well.

A recent study in the January issue of the Journal of Preventive Medicine states that “a half-hour a day of exercise six days a week is ideal.” The study followed two groups of depressed patients and found that the group that performed only 80 minutes of exercise a week received little to no mental-health benefit, yet the three-hour-a-week group had a substantial reduction in symptoms. The study concluded that "the response and remission rates in the (three-hours-per-week) group are comparable to other depression treatments, such as medication or cognitive behavioral therapy".

Did you read that? “Comparable to medication or cognitive behavioral therapy” but, no prescriptions, no side effects, and no stigma. Very interesting.  Depression is serious but it is not forever, it is cyclical. If you feel blue, get up, put on your running shoes and go for a run. You’ll feel better. I swear.